Issac Gibson is studying a PhD in Creative Arts for Palliative Care at the Sonic Arts Research Centre at Queen’s University Belfast.

He created beautifully presented wooden boxes complete with old-style transistor radio controls which play the interviews categorised in chapters for people to choose which to listen to.

It’s made even more authentic with music clips and specialised sound effects to enhance the listening experience for loved ones.

The Annahilt man personally delivered the memory boxes to each person within a week of each recording being completed.

He said he got the idea from recording interviews with his late grandfather, William Crockard, who died from cancer in 2018.

He realised the lasting impact for such recordings after he presented his grandfather’s sound box to his mother after his death.

Isaac said: “Her reaction was an indication of the enormous potential that personalised listening experiences could offer to people and their family members. That’s when I had the idea for the project.”

Former plasterer Michael Hynds (74) is one of the people who agreed to take part in Isaac’s project. He said he is delighted to be able to share his family history with his wife Olga and two daughters.

“When my daughters first listened to my stories, they laughed as they said it was typically me,” said Michael.

“They loved it. My sister and her children never knew as much about my father and their grandfather, Hugh Hynds, and their two uncles until they listened to it, so it has a much wider family interest than my own children.”

Michael believes it is important to pass on family history down the generations, and praised Isaac’s project as he believes that ‘...this is something that will last and can be listened to time and time again’.

“Going to those meetings literally changed my life. We never talk about death, everything but that and I made some close friends through it. It’s meeting with other people who are going through the same thing as you that gives you the support as nobody else can really understand what you are dealing with unless they are also facing it.”

Dominic Quinn (74) also took part. He has known Michael since childhood and reminisced about working in his very own Quinn’s bakery in Scotch Street in Downpatrick .

“My family really appreciates the memory box as I give information about the background of the family and growing up in the country. It also gave me a chance to talk about my own mother and father and aspects of my life such as part-owning an Austin A40 car with my cousin and another friend for the price of £5 when I was a teenager. It was a job for us to get the price of it together, even though it was only £5”

Dominic is thankful to have the memory box for his wife Doreen, his two children, grandchildren and his great grand-daughter.

“It was a great project to be involved in and I would only hope that everyone could leave a memory box like this behind,” added Dominic.

“As a wood turner myself, I must admire Isaac’s beautifully made wooden box. It’s a wonderful thing for me and my family to have.” 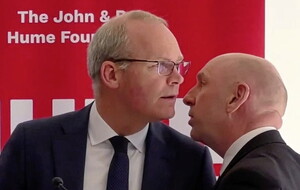