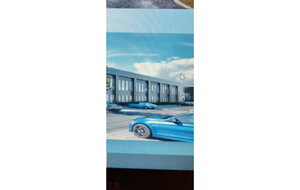 Antrim-based company Jans Composites has been given the go-ahead to build a new £10m factory with the creation of 250 jobs.

The greenlight was given by Antrim and Newtownabbey Borough Council’s Planning Committee on Monday.

Jans has been operating at Caulside Drive at Newpark Industrial Estate since 2019.

The proposed new building will comprise of factory floor and office space.

“It is considered that there is unlikely to be any significant overshadowing or loss of light as a result of this development,” the report says.

The report notes: “Concern has been raised that the proposal may impact upon the privacy of nearby residential properties. There are no windows on the southern elevation of the building to facilitate overlooking or the perception of overlooking.”

Councillors were advised the local authority’s Environmental Health Section (EHS) has reviewed the noise assessment and has concluded the proposed development can “operate without adverse impact on nearby residential amenity subject to noise control conditions”.

In response to a query by Antrim DUP Alderman John Smyth, planning consultant Gavin Rolston said a “detailed landscape scheme” has been submitted as part of the application.

He added it will be placed along the boundary to “ensure significant screening” for residents.

Mr Rolston indicated a “very detailed” noise assessment has been a submitted as part of the application. He went on to say an acoustic fence will be placed along the boundary.

Glengormley DUP Cllr Alison Bennington said a beekeeper lives in the area and asked for an assurance flora and fauna will not be removed.  She was told “significantly more landscaping” will be introduced around the boundary.