We've all struck oil - but half will still be worse off 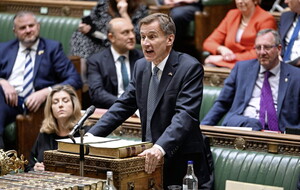 ONE in two households in the north (55 per cent to be exact) will be worse off as a result of Jeremy Hunt’s Autumn Statement, which laid out a range of tax rises and spending cuts.

That's not a political statement but official Treasury analysis, so presumably we must to take that as fact.

And while the budget was perhaps not as doom-laden as many had feared, it was certainly no pre-Christmas stocking of goodies and does little to restore confidence as people grapple with severe financial challenges.

Yes, the £100 payment originally earmarked for all oil-fuelled homes here was doubled to £200. It will now actually go to every household, a bit like the £100 High Street voucher scheme (remember that?) which brought almost 1.4 million shoppers on to Northern Ireland's high streets a year ago.

Seemingly it was going to prove too costly to sift out the 70 per cent of oil houses from others heated by electricity and gas, so the Treasury, in a rare act of kindness (or, more likely, to save on tens of thousands of man-hours working it all out) it simply rolled over and said everybody will benefit from it. Result.

But some words of caution. The £400 payment due for all homes under the Energy Bill Relief Scheme still seems light years from getting into people's electricity meters, so the timing on this enhanced oil bonus can't be taken for granted either (although winter would be nice!).

Overall, the Chancellor stayed true to his word in focusing on financial stability and targeting support for the most vulnerable in society, though in the teeth of a recession, his statement will not increase business confidence.

Companies here will look at the statement and welcome a £13.6 billion package of business rate support for small businesses. But crucially, as with so many of his schemes, they'll be lobbying for the Barnett consequential to ensure some of the relief filters through to struggling small traders in Northern Ireland.

After the chaos and economic fallout from the ill-fated ‘Kamikwazi’ fiscal policy announcement, which turned to dust before the ink had dried on the shortest-on-record ex-chancellor's statement, Prime Minister Sunak and Chancellor Hunt were caught between a rock and a hard place in trying to plug a £55 billion fiscal hole, and it left little room for any rabbits to be pulled from any hats.

Notwithstanding the additional Barnett consequentials for health, experts say it's likely yesterday's financial statement will significantly reduce the value of the north's block grant in real terms over the years ahead, coming at a time when public finances are already in a perilous state.

We might think we've all struck oil. But the measures Chancellor Hunt has imposed are unlikely to induce any kind of confidence among people who are already petrified about their short and long-term financial wellbeing . . .

Plaque to be unveiled to firefighters killed in 1971 Derry blaze

Road toll increase in the Republic 'another blow' to motorists