ONE of Northern Ireland's future top judges believed the RUC rank and file were "worse and more sectarian" during the 1980s than two decades earlier, according to secret papers.

In a private conversation with the Irish ambassador Noel Dorr in 1986, Lord Justice Weir - then a Queen's Counsel barrister - also reportedly said the Ulster Defence Regiment (UDR) existed only to keep its members out of worse mischief than they would get up to on their own.

In a document marked "Secret", Mr Dorr wrote to the Taoiseach's office in Dublin that he met Mr Weir at a British Irish Association gathering at Oxford University in January that year.

"Weir was absolutely scathing in his judgment of the UDR (some of whom he has defended in specific cases) and highly critical of the RUC," he wrote.

"He said the UDR was 'unreformable'.

"He saw it as the direct successor of the old B-Specials and thought that the only reason for its existence was to keep its members out of worse mischief which they would get up to individually."

Mr Weir was also "quite trenchant" in his criticism of then RUC Chief Constable Sir John Hermon, claimed the Irish ambassador.

When it was suggested that the RUC had become more professional under Sir John's watch, Mr Weir "would have none of this", according to the letter, just declassified under the 30-year rule.

"He said he knows the police; and the ordinary rank and file recruited in recent years are worse and more sectarian that their equivalents would have been 15 or 20 years ago," wrote Mr Dorr.

"Twenty years ago, he said, the 'ordinary decent policeman' in a police car getting 'the two finger sign' from nationalist youths would have driven on and ignored it.

"Today the police in a similar situation would haul those involved into the police station and fingerprint them, etc - thus spreading bad feeling against the police further within the Catholic community."

Mr Dorr added: "Weir had little respect for Hermon and gave no credence to his story of improvement in the force. He also thinks that Hermon, privately, has a very poor opinion of the quality of the gardai in the south and on the border."

Mr Weir implied "that he would have his own tales to tell, in a critical vein, about policing on the southern side" from holidays taken across the border, said Mr Dorr.

The then barrister told the diplomat that he had obtained a conviction against a British soldier in 1985 "in the teeth of continuing and serious obstruction on the part of the police," according to the ambassador.

Mr Weir concluded the only remedy for the RUC was to bring in more mid-ranking "mainland" officers to "make it more professional and less sectarian", Mr Dorr wrote.

Although Mr Weir expressed his views "very trenchantly and repeatedly" in the private conversation on a Saturday night, Mr Dorr said he "spoke much more blandly" the following day during a 10-minute speech to the conference.

When asked afterwards why so, the barrister told the diplomat that it was his first time at the British Irish Association and he had "not quite known what tone to adopt", said Mr Dorr.

"He felt somewhat regretful afterwards that the result had been to gloss over the real problem," he added.

Signing off his dispatch, Mr Dorr wrote: "I might mention finally, notwithstanding what might be expected in view of his opinions, that Weir himself made a point in discussion of the fact that he is of a Protestant background and family.

"He thought this was why he had been asked to prosecute in certain cases."

Earlier this year, Lord Justice Weir presided over a major review of long-delayed coroners' investigations into legacy killings, including many contentious Troubles deaths, some involving claims of collusion or state wrongdoing.

The review was set up to establish why progress has been painfully slow to date.

In a statement on Thursday night, the Office of the Lord Chief Justice said it had "no comment to make". 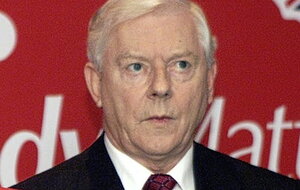