For the last five days, Worthy Farm in Somerset has homed more than 200,000 people and hosted a number of performances for the ages.

Meanwhile, Diana Ross reeled off hit after hit when she took to the stage for the Sunday teatime legends slot.

The soul singer treated the crowd to a selection of classics including I’m Coming Out, Baby Love, You Can’t Hurry Love, Stop! In The Name Of Love and at the conclusion of Chain Reaction pink confetti was launched from the stage.

Another standout moment was Sir Paul’s Saturday headline show where he wowed the crowds with a show-stopping setlist which included surprise guest appearances from Bruce Springsteen and Foo Fighters frontman Dave Grohl.

As he took to the Pyramid Stage, the former Beatle became the festival’s oldest solo headliner, a week after he celebrated his 80th birthday.

During his more-than-two-hour set, he played a range of classic songs including Hey Jude, Blackbird, Live And Let Die, Ob-La-Di, Ob‐La‐Da and Get Back.

The electrifying show was further amplified as he introduced Grohl to the stage to sing I Saw Her Standing There and Band On The Run, marking Grohl’s first public performance since the death of his Foo Fighters bandmate, drummer Taylor Hawkins.

Springsteen later joined Sir Paul for Glory Days and I Wanna Be Your Man.

As part of the encore, through special technology which could isolate John Lennon’s vocals from old recordings, Sir Paul was able to duet The Beatles’ track I’ve Got A Feeling alongside his former bandmate on the Pyramid Stage.

The festival featured countless other memorable moments including Greta Thunberg delivering a passionate speech from the Pyramid Stage calling on society to take on its “historic responsibility to set things right” with the global climate crisis.

It also hosted an array of Ukrainian representatives, with the country’s president Volodymyr Zelensky giving a poignant address via a video message and Kalush Orchestra playing their first UK performance since they triumphed at Eurovision 2022.

On route to the festival, many artists and festival-goers had to battle travel chaos as major rail strikes took place during the event and many flights were delayed or cancelled.

However, these issues did not dampen everyone’s spirits nor could the infamous Glastonbury showers as the weather remained relatively dry in comparison to previous years. 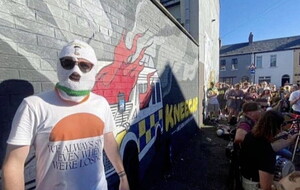