Hundreds of fans have lined the streets for a procession ahead of the funeral of The Wanted star Tom Parker.

The pop singer’s widow, Kelsey, whom he married in 2018, led a cortege featuring three black horses through Petts Wood in south-east London on Wednesday morning.

Flowers spelling out the word “Daddy” adorned the side of the carriage while a flowered sign that spelled the word “Tom” in red roses was attached to the front.

Parker died last month at the age of 33, surrounded by his family and bandmates, 17 months after being diagnosed with an inoperable brain tumour.

Family and close friends of the star gathered in The Sovereign Of The Seas pub opposite the funeral parlour before the procession began.

Outside St Francis of Assisi church, flowers spelled out the words “Glad You Came”, the title of The Wanted’s 2011 hit that went to number one in multiple countries.

Parker disclosed in October 2020 that he had been diagnosed with stage four glioblastoma and had begun radiotherapy and chemotherapy.

Despite his diagnosis, in the weeks before his death he had performed on stage with his bandmates as part of their much-delayed reunion tour.

Ahead of the parade, receptionist Chloe Mayne, 25, from Plumstead, a self-professed “super-fan” of the late singer, told the PA news agency: “It was amazing seeing him (perform live). It’s horrible that I saw him at the O2 and then two weeks later he died.

“The day he died it really hit me. To be fair I don’t think anyone was expecting it that quickly, I thought he’d have at least another Christmas and maybe next year.

“He did look bad but then he was in Spain for three weeks having treatment before the tour started so I think everyone thought it was bad because of that.

“Most shows he did one song on the tour but at the O2 he did two because I think his kid was there – he did Gold Forever and Glad You Came.

“He was sitting in a chair but it was amazing, it looked like he was having the time of his life.”

Ms Mayne said she was 15 when she became a fan of The Wanted and had attended around 25 of the band’s concerts, adding: “He was my childhood really.”

Kevin George and Susan Potter, from Orpington, whose eldest son Daniel died from an astrocytoma Grade 3 brain tumour at the age of 22 in 2018, were among those waiting outside the church.

Asked whether Parker’s campaigning for brain tumour research in his final months had affected her, Ms Potter, who was carrying a framed picture of her son, said: “Of course it did, especially the BBC One interview that they did and the way he dealt with it. It was exactly how my son dealt with it – exactly.

Mr George said: “It’s good. It is raising the profile as well. He has raised a lot of money for research, which is what it needs.

“A lot of other cancers have almost been eradicated. They need to have more research into brain tumours.”

Fans speculate after Zayn Malik sings another One Direction tune 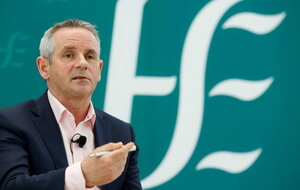