A Swiss drumming sensation which won global recognition after performing at the Royal Edinburgh Military Tattoo has been revealed as the first international act to take part in the show’s return later this year.

The Top Secret Drum Corps took the tattoo by storm in 2003 and organisers have announced it will return to the castle esplanade in August.

The tattoo was cancelled in 2020 and 2021 because of the coronavirus pandemic, but usually attracts hundreds of thousands of people each year alongside a large global television audience.

Michael Braithwaite, the tattoo’s creative director, said he is looking forward to the “triumphant return” this year and is “thrilled” The Top Secret Drum Corps will be part of it.

“They are one of the most dazzling drumming acts in the world and their sensational performance will light up what’s sure to be another incredible spectacular throughout August,” he said.

“Whether you’re excited to return to the esplanade or keen to experience the tattoo for the first time, I’d urge people across the country to get their tickets and get set to be wowed by the show.”

The Top Secret Drum Corps was founded in 1991 by seven drummers who wanted to preserve Basel’s drumming heritage. They began mixing the traditional style of drumming with other drum types and striking visual effects.

They play in an upbeat and playful style, with sections of the routine featuring drumstick juggling, exploding flagpoles and a drummer’s duel to wow audiences.

The announcement comes after a week of intrigue in the capital, with a secret agent taking to the streets of Edinburgh with a suitcase containing details of the first act, with passers-by having the opportunity to crack the Morse code message.

This year’s tattoo theme is Voices and organisers said the show will represent the collective power and connection of voice through a combination of music, dance and military precision from some of the world’s leading armed forces and cultural performers.

Military acts will continue to play a central role in this year’s performance, with the Army confirmed as the lead service in 2022. 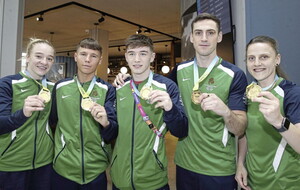