Find out what's on television today with our TV listings guide.

HOMES UNDER THE HAMMER (S)

BBC NEWS AT ONE; Weather (S)

ESCAPE TO THE COUNTRY Sonali Shah helps a Nottinghamshire couple find a home in Argyll and Bute. (S)

MOTD LIVE: FIFA WORLD CUP 2022 France v Australia (Kick-off 7.00pm). Gary Lineker presents coverage of the Group D match at Al Janoub Stadium in Al Wakrah, Qatar. Didier Deschamps’ side are looking to become the first since Brazil in 1962 to retain their title, something that has only been done twice in the history of the tournament. (S)

TOKYO VICE New series. Ansel Elgort stars as American journalist Jake Adelstein who is trying to make it big in Tokyo but he quickly learns not to ask too many questions if he knows what is good for him. After joining forces with the police department he soon finds himself in a fast-paced world of crime, corruption and deceit. (S)

BELFAST HARBOUR: CRUISES, CRANES AND CARGO The harbour police take delivery of a new boat, Sailortown’s old church undergoes regenerative work and Belfast Giants get back on the ice for the first time in 18 months. (S)

Weather for the Week Ahead (S)

FLOG IT! In St Albans, Hertfordshire, Claire Rawle discovers an arts and crafts bowl that may have belonged to George Bernard Shaw’s wife. (S) (R)

EASTENDERS Linda spots Janine with the paramedics but cannot get hold of Mick, forcing her to accompany her to hospital. Meanwhile, Ben is concerned about keeping Lexi in the dark about Lola’s cancer. (S)

CELEBRITY ANTIQUES ROAD TRIP Gethin Jones and Dr Xander Van Tulleken cruise across the Welsh border in a couple of large classic American motors, guided on their hunt for antiques by experts Irita Marriott and Serhat Ahmet. Xand and Serhat discover their shared love of ceramics and set out to find the perfect piece to take to auction. (S)

LOUIS THEROUX INTERVIEWS – KATHERINE RYAN Louis meets the comedian and writer, Katherine Ryan, for a frank and honest conversation about her career, relationships and the changing shape of her family. (S)

NURSES Emma visits a mental health patient who wants to come off his medication, and the neonatal unit is busier than ever. (S) (R)

MANDY Watch out Richard Branson - Mandy trains to be an astronaut in preparation for a mission to Mars. Comedy short, with a guest appearance by Anna Maxwell Martin. (S) (R)

TIPPING POINT Ben Shephard hosts the arcade-themed quiz in which contestants drop tokens down a choice of four chutes in the hope of winning a £10,000 jackpot. (S) (R)

THE CHASE Contestants Jen, Fergus, Shelby and Rachael work as a team to take on one of the ruthless Chasers and secure a cash prize. (S) (R)

THE MARTIN LEWIS MONEY SHOW: LIVE As the economic crisis continues, Martin Lewis will be joined by a panel of experts to address the financial subjects that matter most to viewers, from benefits and tax to state pension. Martin will also deliver his final News You Can Use before we head into the festive break. (S)

I’M A CELEBRITY GET ME OUT OF HERE! With the numbers in the camp continuing to decrease, Ant and Dec look at highlights from the past 24 hours as the remaining campmates continue to grapple with life in the Australian jungle, and take on everything that is thrown at them in the hope to win stars to feed the camp. (S)

THE GREAT BRITISH BAKE OFF The first of two highlights programmes celebrating 10 years of the culinary contest. Featuring some of the most unusual, confusing and innuendoladen cakes to grace the tent. The programme also revisits some of the most popular contestants from past series, including Norman, Flo and Kim-Joy. (S) (R)

MIRIAM AND ALAN: LOST IN SCOTLAND AND BEYOND The pair visit a drug den in Santa Barbara where Alan takes a chance to challenge Miriam’s anti-drugs stance. In Palm Springs the two play drag bingo and join a gay knitting group. Then they head to LA to meet with a relative of Alan’s. (S)

YOU WON’T BELIEVE THIS New series. Ellie Taylor hosts the interrogation game show for amateur sleuths have to prove that they can figure out fact from fiction and find the guilty party. Using tactics deployed on criminals, the contestants grill the suspects. If they spot the truth they win a cash prize, but choose a fibber and the suspect takes the money. (S)

The Adventures of Paddington (S) (R)

DOGS BEHAVING (VERY) BADLY Graeme Hall helps a couple whose Border Collie will not let them leave the house without a marathon bout of barking, while every phone call also sets the dog off. Graeme also meets a Labrador that becomes aggressive when there is food around, and a husky with a fear of stairs. (S) (R)

THE YORKSHIRE VET Documentary about vets Julian Norton and Peter Wright and their teams as they administer medical and surgical aid to creatures across the county. Last in the series. (S); 5 News Update (S)

ALEXANDER ARMSTRONG IN SOUTH KOREA Alexander heads to the bustling port of Busan, where South Korea’s biggest fish market is to be found. Alexander gets to try some of the weirdest seafood he has ever seen, fresh from the sea, including a couple of sea creatures that are so fresh they are still moving as he bites into them. Last in the series. (S)

A&E AFTER DARK Dr Chris comes across a motorcycle crashed into some railings on the way home from work, and returns to the hospital with the rider, who is revealed to have internal bleeding. (S) (R)

Shoplifters: At War with the Law (S) (R)

ATHBHAILE – THE COBBLESTONE New series. A look at Dublin’s Cobblestone Pub, which has been a mecca for traditional musicians for decades, but is now facing an uncertain future. In Irish. (S)

FAIR CITY Joan spots an opportunity to get to Dermot, while Tommy’s interest is piqued when Zak pitches the details of his business venture. (S)

SHERWOOD With two killers now on the run, Ian is reluctantly forced to call in the Met to assist in the manhunt, worried how the locals will feel about the arrival of the London force after events during the miners’ strike. Meanwhile, the hunt for the mystery spycop intensifies as a link to Scott is found. Crime drama, starring David Morrissey. (S)

TOP GEAR Freddie Flintoff, Chris Harris and Paddy McGuinness set out to qualify as lorry drivers, before embarking on a stormy HGV road trip across Britain, and a spot of truck racing. Out on the track, Chris runs the rule over the beautiful new Lotus Emira. (S)

THE YOUNG OFFENDERS Conor and Jock decide it’s time to move out of home and head to Spain to run a bar. First to receive the Spain news is Mairead, who is in disbelief - how is she going to keep digging them out of holes when they’re living overseas? Billy Murphy receives some shocking news and Sergeant Healy tries to propose to Mairead. (S) (R)

DON’T LOOK BACK IN ANGER Archive news stories from the past 20 years. (S) (R)

I’M A CELEBRITY GET ME OUT OF HERE! Ant and Dec look at highlights from the past 24 hours.

THE GOLDEN GIRLS Blanche’s brother-in-law arrives on her doorstep with some bad news, and Sophia is involved in a car accident. (S) (R)

THE WONDER YEARS The Arnolds attend a funeral. (S) (R)

7 LÁ Expert analysis and debate on political stories, with an added focus on regional and Gaeltacht affairs.

BETTER CALL SAUL Mike’s tragic past comes back to haunt him. (S)

ROS NA RÚN Rory assures Sorcha he doesn’t have an issue with her mother, it’s his father he’s wary of. (R) 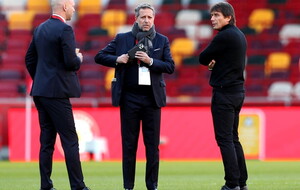