Hillary Clinton and daughter Chelsea have teamed up for Gutsy, a new TV series celebrating the women they admire and look up to. The mother and daughter talk to Kerri-Ann Roper about what 'gutsy' means and challenging the stereotypes that women in the public eye still have to contend with 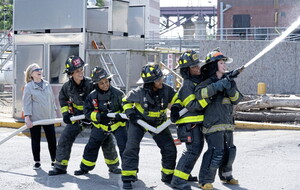 SHE may be a former US presidential candidate, one of the world's most famous women and Queen's University's Chancellor, but Hillary Clinton isn't above trying her hand at clown school or taking a tango lesson.

The 74-year-old and her daughter, Chelsea (42), have teamed up on screen for new eight-part, Apple TV+ series Gutsy, based on their bestselling 2019 title, The Book of Gutsy Women.

In the series, the duo meet and speak with pioneering women, heroes, activists, community leaders and more, with them also joining celebrities like Goldie Hawn and Kate Hudson for a mother-daughter tango lesson on their journey.

Asked what it means to be "gutsy", the former US secretary of state muses that it's a question "we thought a lot about when we were writing the book, and then of course doing the series".

"Of course, there are characteristics. Someone who is determined, courageous, resilient. But not just on behalf of herself," explains Mrs Clinton.

"We decided that we wanted women who were gutsy in those ways, but in addition, that were trying to knock down barriers, right injustices, provide opportunities for others as well.

"So our definition is both individual, but also rooted in the values of the kind of women that we admire and respect and have literally looked up to for each of our lives."

In the series, they speak to singer Megan Thee Stallion about the backlash she's faced in her career, and also speak to Kim Kardashian about her quest in legal advocacy work.

But the series is about more than just star power, as they meet with mothers who have lost children to violent crimes and also engage with activists like anthropologist Dr Jane Goodall and model and land protector, Quannah Chasinghorse.

Mrs Clinton is a trailblazer herself, becoming in 2016 the first woman to lead a major party's ticket as she was confirmed as the Democratic presidential nominee.

Former TV star Donald Trump went on to be named the winner and 45th president of the United States.

For her, the Gutsy series, currently streaming on Apple TV+ and made in conjunction with HiddenLight Productions (the global studio formed by herself, Chelsea and Sam Branson), was a chance to keep learning as she gets older.

"And I enjoy it, and that I'm willing, as Chelsea says, to get outside my comfort zone and do things I never would have even imagined doing a few years ago," she explains.

"Because I felt so strongly committed to this project, and to telling the stories of the women that we were showcasing. I'm very aware of how fortunate I am to have opportunities like this.

"But I hope that maybe through this series, women my age and around this time in their lives will think of things that they continue to do, that they can continue to learn from that will be exciting to them.

"And particularly in conjunction with the next generation and generations even younger. Because I really love the connectivity that I felt during the filming, and now as we're talking about the series and feeling that these stories are so rich and impactful".

Chelsea says they wanted to ensure that "we had a real kind of dynamic spectrum of women who were being gutsy in so many different ways, whether, you know, our local firefighters here in New York City or, you know, the amazing Jane Goodall".

They are both passionate when asked about the narrative and intense scrutiny that often surrounds women in the public eye.

"It's maddening that the double standard is still so alive and being unfortunately, practised day in and day out in every part of the world," says Mrs Clinton.

"But I think series like this, to try to break down some of those walls to get people to see the variety of women and how they express themselves and what they stand for, and who they are and how they look.

"And that there's not one size fits all and therefore we need to do more to highlight even more women's lives.

"And it's a trap that we all have to escape from.

"And so I feel really strongly about this and it's one of the reasons why I'm so proud and excited about our series, because we think that this will contribute to that conversation.

"Enough, judge us on our merits, if you don't like what we do, if you don't agree with our position, that is fair game, but enough of all of the nonsense that passes for commentary on women in the public arena."

There is no shortage of honesty in the series, with Mrs Clinton talking about her marriage to former US president Bill and Chelsea speaking openly about growing up in the public eye.

Talking about the gutsiest thing they've ever done in their lives, Mrs Clinton references her marriage, which faced intense scrutiny during the Monica Lewinsky scandal.

She said: "The gutsiest decision I ever made in my private life was to stay in my marriage, which, as everybody knows, was playing out on the global stage and very difficult to deal with in a way that gave me the confidence to make the decision that was right for me and my family.

"And I did that and have no regrets. And then in my public life, running for president. I mean, this was a tightrope with no net, and it was really difficult because of all of the unprecedented questions that were raised about a woman being president.

"And obviously, I'm very proud of our campaign and very proud of getting more votes. Very sorry that I didn't actually win the seat, but it was a very gutsy undertaking."

Mother-of-three Chelsea says: "I think the gutsiest thing I've ever done is to lead my life.

"I don't know what it's like to not be under kind of the public gaze, and to not have an enormous amount of kind of expectations for good and ill, for people who want to see me succeed and want to see me flounder or fail or worse.

"So I just think I've had to find gutsiness to lead my life and to lead my life in a way that has kind of integrity and meaning and purpose and value to me, as a kid, as an adolescent and a teenager, as a young adult, and now as a mom myself."