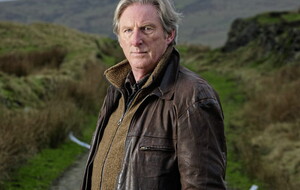 JESUS, Mary, Joseph and the wee donkey... Line of Duty actor Adrian Dunbar is back on our screens this weekend with a new detective drama, but he says ex-detective Alex Ridley is nothing like Ted Hastings.

"He's a completely different character. Ted is office bound and uniform bound and a very dignified and formal character whereas this guy is complicated. He's a bit gruff," explains the 64-year-old Enniskillen man.

Ridley retired from the police force after years of dedicated service due to his health concerns following the loss of his wife and daughter in a house fire. A bigger question runs throughout the entire series about his involvement in that tragedy.

"It's an absolute thrill and honour to have the opportunity to put my stamp on it. It's also a huge responsibility when you're playing the named character," says Dunbar, who was very much involved in the creative process.

He was delighted when producers agreed to his suggestion for his character to have a musical side – owning and singing in his jazz club.

"I always liked the idea of the singing detective back in the day, but it's not twee in any way and extremely integrated into the character," says Dunbar.

"Themes of grief and redemption run throughout the series and the music provides Ridley with catharsis.

"The trick with the show was finding Richard Hawley's music as a lot of his work concerns itself with male grief. That helped me resolve where Ridley was putting his grief.

"A series like this exists in the heart and the emotional connection with the person and the development of the characters is something that the audiences are going to find interesting."

Enabling audiences to discover the personal side of the characters excited Coleraine actress Bronagh Waugh about the script, which sees her take on the role of recently promoted DI Carol Farman.

"You explore their home life and their ghosts of the past. I like that element because for me, when I'm watching shows, I need to know and care about the people that I'm spending 90 minutes with every week in order to invest that time and connect with them," she says.

Waugh, best known for her roles in The Unforgotten and The Fall, gave birth to her first child a few months before filming Ridley and she praises her co-star Dunbar for "looking after" her on set.

"I had a new baby and it was my first time playing a detective, with a lot of police and crime speak, and he just very calmly steered the ship and made me feel like I could do it. I felt I needed that."

Given their prominence, it is perhaps surprising that the pair had never worked together - or even met - before filming Ridley.

"It's funny because in Northern Ireland normally everybody does know each other," laughs the 39-year-old.

"Adrian is our Ian McKellen in the north of Ireland and I grew up watching him on stage. The opportunity to work with him was really exciting."

In the first of the four episodes, the pair have an uneasy relationship as the ambitious DI Farman is now the one 'in charge' of her former mentor, whom she coaxes out of retirement. Following the death of a local farmer, the complex murder case takes a dark unexpected twists and flags up flaws in a missing person's case that remains unsolved after 13 years.

"I think like any good friendship, you're both very different and finding the strength of what the other person brings," observes Waugh.

"Carol will work and work and be dogged, whereas Ridley comes around things in a slightly different way - more creative - and that is how he comes up with some genius solutions. It works well."

While some actors employ a vocal coach when trying to nail an accent, Waugh's approach was to find the nearest pub.

"There is a great pub around the corner from where Adrian and I were living – for want of a better phrase, it's an old man's pub. They are the best place to learn. So I had a few glasses of wine, spoke to a few locals and really tuned into the accent," she laughs.

"The way I approach things is that I will speak with that accent for the entire project as it helps me stay in character and learn the colloquialisms that you wouldn't if you just learnt the script."

A graduate of London's Guildhall School of Music and Drama, Dunbar is no stranger to the music scene after previously playing in bands – most recently the country-jazz band Adie Dunbar and The Jonahs.

"There was no nervousness at all about singing," says Dunbar casually, who also plays piano-on-screen.

Viewers even see him playing piano on-screen: "I wouldn't call myself a pianist, but I can knock out a few chords."

So, is an album on the cards in the future?

"I've been talking to a couple of people, but it's about finding the time," adds Dunbar, who in September will be playing a gig in Soho with his friend John Altman, the Emmy and Bafta winning composer and musician

"I want him to do a Ridley album," adds Waugh.