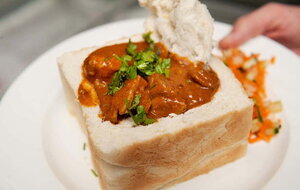 Hit dating show Love Island is returning to South Africa for the first time since the pandemic began.

The winter series – which is being hosted by radio DJ Maya Jama for the first time – will see 10 islanders entering a villa looking for love.

If the show inspires you to have a look at everything South Africa has to offer, you may want to try some of the country's most popular dishes…

This warming curry is well-placed for a winter dinner – usually made with chicken on the bone, it is often served with rice, roti and some kind of fruit chutney.

It has its roots in dishes brought to South Africa by Indian and Indonesian slaves in the 17th century, and is gently spiced with a mix of coriander, cumin, turmeric, cardamom, and cinnamon.

It has a sponge-like texture and apricot jam in the batter. The pud is drenched with syrup, and is often paired with cream or custard.

A braai is a traditional South African BBQ, where meat is grilled on wood or charcoal to give a smokey flavour.

Braai-style cooking is becoming increasingly popular in the UK – Boris and Carrie Johnson are said to have had one at their belated wedding celebrations in 2022.

This bean and tomato relish is equal measures spicy and fresh, and makes an excellent side dish – often served at braais.

Its roots lie in gold mining, when workers would combine the vegetables they had with canned beans to eat with pap (a type of porridge made from maize).

Often described as South Africa's national dish, bobotie is another recipe with Indonesian roots. Curried minced beef is topped with a savoury egg custard, and baked until golden.

There is a huge community of Indian people in South Africa, and their influence is felt in bunny chow.

This popular street food dish is a bread bowl filled with curry – typically made up of meat with chickpeas, potatoes and various spices.

Many countries have their own take on a custard tart, and South Africa's is the melktert. Made with eggs, milk, cinnamon and sugar and popped in a pastry case, it can be eaten hot or cold.

Love Island returns at 9pm on Monday January 16 on ITV2 and ITVX.

Snow has fallen but is there still time to save on Europe's ski season?

Is this the world's most affordable city break?