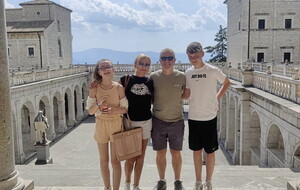 WHEN you stand and look into the valley from the abbey at Montecassino you wonder how the Benedictine monks constructed an inspiring monastery at such an inhospitable place.

On a cliff almost 1,800 feet above sea level, the abbey, founded in 529, towers over the town of Cassino and dominates the Liri valley in central Italy.

It's this domination which led to its destruction in 1944 when the Allies mistakenly thought the Germans had taken over the abbey as a defensive position to prevent their access to Rome.

They simply didn't believe an assurance to the Vatican from the German general that Nazi defenders would not interfere with the monastery.

The abbey, which has since been reconstructed, was destroyed by high explosive bombing (killing 2,000 sheltering civilians in the process) but this did not prevent tenacious Nazi resistance as they rushed in from their positions to defend the ruins.

Repeatedly, British, US, Moroccan, New Zealand Maori and Indian troops were driven back with serious losses. The Allies suffered 55,000 dead and injured over the four-month battle.

Only on the fourth major offensive did the Allies drive out the Nazis. A graveyard just below the peak, in the shape of a cross, marks the sacrifice of more than 1,000 Polish soldiers in this final push.

The memorial's inscription reads: "For our freedom and yours. We soldiers of Poland gave our soul to God, our bodies to the soil of Italy and our hearts to Poland."

While Italy was liberated the following year, it would be another 45 years before Poland was free.

Europe is replete with sites where ancient and modern history converge, but they seem more plentiful in Italy.

We stayed at the Eurocamp parc at Baia Domizia, on the coast about an hour north of Naples and the number of inspiring days out from this location is incredible.

The bar and restaurant at Baia Domizia

Within a couple of hours by car or public transport you could visit the wonders of ancient Rome, the Vatican, the crazy and high-octane city of Naples, the Amalfi coast, the island of Capri and the world heritage site of Pompeii.

It's one of the joys of Eurocamp holidays that generally you have a car and when you fancy a change of scene from the pools, the beach and the sporting activities, you can pack up the family and explore.

And don't worry too much about the Italian driving. Outside of Naples there's very little difference from France. Perhaps I was lucky this year but it seems to me that Italian road etiquette has improved over the years.

We arrived at Baia Domizia just before midnight after an evening flight from Dublin but check in was super smooth.

Within five minutes we were in that lovely moment so familiar to anyone who has gone on a parc holiday - driving at 5mph behind a bicycle guide who's directing you to your accommodation.

Eurocamp holiday parcs generally fall into three rough categories. There's the small parcs where it's easy to get to know people, because you meet them all the time, and the atmosphere is more relaxed.

Then there's the super parcs, as big as small towns. They are slightly more impersonal but every facility and activity imaginable is catered for, including multitudes of the kind of twisty-turning slides children dream of.

Baia Domizia falls between the two. It's large enough (more than 1,000 pitches) to have all the facilities but it's not overwhelming.

On the food and drink side, there's a restaurant, two bars, takeaway pizza and an ice-cream shop. All round the prices are fair and the staff very friendly.

There's also free wi-fi across the parc, although it works best in the pool and restaurant areas and near reception.

And not to forget the traditional animation team and children's fun camps for the younger ones. At Domizia the festivities begin around 11am with aqua aerobics, sporting activities throughout the afternoon, then an evening entertainment show followed by a disco.

But perhaps Baia Domizia's best feature is that you have direct access to the Mediterranean. A five-minute walk from the pool complex through the forest at the back of the site and you emerge onto a beautiful sandy beach. Next stop is Sardinia as you look out across the Tyrrhenian Sea.

It's a lovely sandy beach with shallow water so perfect for families. There are lifeguards, a fresh water shower and a snack bar.

And if you find sand a bit annoying, don't miss the specially constructed grass strip a few metres above the beach with lovely views.

It's the perfect place to end a relaxing day. And with a cold beer in hand, looking out over the sea as the sun goes down you can plan the following day's adventure in Italian history.