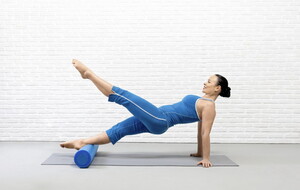 While exercise is important for pelvic health, most women don't actually need strength training - they need to relearn co-ordination of their muscles

ARE pelvic floor exercises just one more thing on your yet-to-do list? Women are becoming increasingly aware of the need to strengthen their pelvic floor muscles to help with problems such as incontinence - especially after childbirth.

Last year, the National Institute for Health and Care Excellence (Nice) recommended that all women should be advised to do pelvic floor muscle training throughout their lives. (And recently a study published in the Journal of Sexual Medicine suggested this should be combined with sex for best results - at least, for new mums.)

But how much pelvic floor work do we really need to be doing? And are we doing it right?

As some experts point out, a healthy pelvic floor involves more than just muscle strength - in fact, co-ordination and control are more important, they say.

There's also a risk of overworking these muscles, leading to a 'hypertonic' pelvic floor, causing pain as well as discomfort during sex. And there are some types of injury - such as those caused by childbirth - that no amount of pelvic floor exercise will fully repair.

"We need to help women, but it's unfair to suggest they do things that may not correct their problem," says Professor John DeLancey, a urogynaecologist and director of the Pelvic Floor Research Group at the University of Michigan in the United States.

The pelvic floor, a complex mesh of muscles, lines the base of the pelvis like a hammock, and supports your bladder, bowel and birth canal.

Problems such as incontinence and prolapse, though little talked about, "are really common", says Prof DeLancey. Nearly half of women over 50 sometimes leak urine, according to a 2018 University of Michigan survey. And some degree of prolapse is thought to affect one in three women who've had children, and around 40 per cent of all women over 50.

But it's not only pregnancy and childbirth: anything that puts additional strain on the pelvic floor - such as carrying large amounts of body fat, chronic constipation or a prolonged cough - raises the risk of over-stretching or injury.

"We're seeing a lot of women now with pelvic floor issues after coughing for long periods with Covid," says Katie Mann, an NHS specialist pelvic floor physiotherapist based in the north-west of England.

Hormone changes - such as a drop in oestrogen levels during the menopause - can also affect the elasticity of the pelvic floor. There are oestrogen receptors throughout the pelvic floor muscles and the hormone helps control the production of collagen (which gives tissue its flexibility).

This is why some women first experience symptoms during the menopause. Anti-oestrogen medication for breast cancer can also have a negative effect.

Unfortunately, says Mann, the widespread belief is that these are problems women just have to put up with.

"There is still an attitude of, 'You've had a baby, so what do you expect?'" she says. "A lack of appropriate training for many healthcare professionals means they normalise this attitude, too."

The NHS advice is to do pelvic floor exercises - sometimes called 'Kegels' (after the US gynaecologist Arnold Kegel, who popularised them in the 1940s/50s).

These involve isolating and squeezing the muscles around the back passage (as if stopping wind) while also squeezing and lifting up at the front (as if trying to stop the flow of urine) and then relaxing the muscles again. You're meant to perform this squeeze 10 times slowly, relaxing between each contraction, followed by 10 fast contractions - in order to exercise both the slow-twitch and fast-twitch muscle fibres needed to maintain muscle tone.

But improving your pelvic floor function goes beyond simply doing a set number of squeezes every day. According to Michelle Lyons, a women's health physio and founder of Global Pelvic Physio - a forum for clinicians to learn more about pelvic health - practising the correct technique is likely to be more important than muscle strength.

As Prof DeLancey explains, while pelvic floor strength can be measured on a scale of zero to five (zero being 'no contraction at all' and five being 'strong'), "no-one's ever actually shown that the strength of the muscle determines the outcome".

Instead, he says, there is good evidence that teaching women how to activate the right muscles in anticipation, before they do something that normally causes them to leak - such as coughing or lifting - makes the biggest difference. This technique is sometimes called 'the knack'.

"For most women with leakage, they don't actually need strength training - they need to relearn co-ordination," agrees Lyons. According to Mann, "a lot of women struggle to identify the correct contraction", particularly when they are given just verbal instructions or a printed leaflet.

Even when women say they know how to do pelvic floor exercises and perform them regularly, almost a quarter (23 per cent) are actually doing them wrong, according to a 2015 study published in the journal Female Pelvic Medicine & Reconstructive Surgery.

While this is unlikely to do any harm, it can be demoralising if symptoms don't improve, says Mann.

In an ideal world, every woman would have an individual pelvic floor assessment, including a physical examination, especially after childbirth, says Emma Brockwell, a physiotherapist specialising in women's health and author of the book Why Did No One Tell Me?

"If you have symptoms and you've been doing pelvic floor exercises every day for six to eight weeks, with no improvement, that's a sign you might need more guidance from a professional," she says.

But not everyone who struggles with leakage will have a weak pelvic floor.

"Some might have an overactive or 'hypertonic' pelvic floor that needs relaxing - or 'down?training'," says Mann. This can involve a combination of relaxation and breathing techniques, internal massage or the use of vaginal dilators. Signs include difficulty inserting tampons or emptying the bladder completely, or a stream that starts and stops.

Just as important as strength is how the pelvic muscles are working in harmony with other muscles. "Nothing happens in isolation in our bodies," she adds.

"For a long time, pelvic floor exercises were literally just that: squeeze and release. What we now know is we have to take a whole-body approach to pelvic health."

For example, exercises to strengthen the calves and glutes (buttock muscles) can help support the pelvic floor.

Even the way we breathe and walk - or if we wear shoes that are too tight - can affect how well we can engage the muscles.

This is because the diaphragm (the muscle that sits below the lungs) pushes down on to the pelvic floor, while even a slight change to the foot arch can have a knock-on effect on the position of the pelvis.

A review of evidence by researchers in Spain in 2020 suggested that reduced flexibility in the foot arch is one factor that may explain the increased risk of urinary incontinence noted in elite female athletes, such as gymnasts and ballerinas.

However, experts agree that genetics are probably the main risk factor for pelvic floor problems. "Some people's tissue is very stretchy and resistant to injury while others' tissue may be stiff and brittle," explains Prof DeLancey.

There are some injuries to the pelvic floor, however, that exercise alone cannot repair, such as where the muscle detaches from the pelvic bones. Known as an avulsion, it's diagnosed via an MRI or ultrasound scan. In some women it causes no symptoms while in others it leads to severe incontinence and pelvic pain.

The injury can sometimes be repaired by surgery and now experts are working on developing specially tailored exercise programmes to help (although these won't reattach muscle to bone).

The Journal of Medical Ultrasound in 2020 reported on a case where after 13 sessions of pelvic physiotherapy - including stimulating the muscles with electrodes - the patient's incontinence symptoms improved and the gap between the detached muscle and the bone reduced.

Prof DeLancey and his team are now looking at how to identify who might be at risk of avulsion, with research showing that an ultrasound scan, at around 36 weeks' pregnancy, could "assess an individual woman's risk of injury with 90 per cent accuracy" (based on factors such as the baby's size and the shape of the pelvis).

He hopes that within 10 years this will be a standard part of pregnancy screening, helping women decide if they want a caesarean section, based on their risk. For now, Mann urges women to "be persistent" in getting treatment. "If you don't get where you want with the first GP, speak to the practice nurse or health visitor," she says.

"It's never too late to get help," adds Lyons. "You do not have to accept poor pelvic health as a facet of having a baby or getting older."