It's good for blood pressure and may fight colds. But what about the odour? And how much do you need? 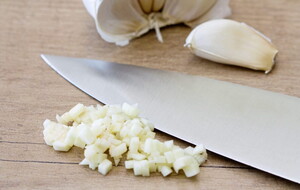 Medical research links garlic to a number of health benefits

FOR thousands of years garlic has been considered one of nature's health foods. More recently, studies have shown that it does actually have an impact, improving blood pressure, cholesterol levels and immunity.

Garlic's health benefits derive from the many natural compounds it contains, particularly allicin (also responsible for its pungent smell).

A 2018 review of studies by the University of Nottingham said that these benefits are "rooted in the sulphur compounds the plant absorbs from the soil which break down into around 50 different sulphur-containing compounds during food preparation and digestion", which are "biologically active" inside our cells.

Specifically these compounds seem to boost the body's production of gaseous 'signalling' molecules, key to cell communication. Low levels of these molecules are associated with serious conditions including heart disease.

Indeed, a review of trials in the journal Experimental and Therapeutic Medicine in 2020 found that patients with high blood pressure given 600-900mg garlic supplements for three months experienced a drop in their blood pressure that was similar to the effect of medication known as ACE inhibitors.

It's thought that allicin stimulates the production of nitric oxide - which dilates blood vessels - as well as inhibiting ACE (angiotensin-converting enzyme) activity; this relaxes blood vessels and reduces blood pressure.

Laboratory studies also suggest allicin and other compounds in garlic have anti-viral properties.

However, Dr Jenna Macciochi, an immunologist at Sussex University, says there are only two 'robust' human trials: one found that people taking 180mg of allicin for three months got fewer colds than a placebo group.

A second showed that taking 2.56g of aged garlic extract improved immune cell function, which could reduce severity of cold and flu symptoms.

"We can say that garlic does appear to play an immune-supporting and anti-viral role and may contribute to the reduced severity of colds, although eating a small amount as part of a meal might not provide enough of a dose to improve virus symptoms," says Dr Macciochi.

Aidan Goggins, a pharmacist and independent adviser to the supplement industry, says: "To get the therapeutic dose of around 900mg [equivalent to 3-8mg allicin] you need to eat around a clove of raw garlic every day."

But it's not as simple as just chucking some in your stir-fry.

Clare Thornton-Wood, a spokesperson for the British Dietetic Association, adds: "Allicin is only formed when the bulb is chopped or crushed.

"Studies have found it stops forming as soon as it's exposed to heat. So it's a good idea to allow it to sit for around 10 minutes after chopping to ensure the maximum allicin has been produced.

"And don't cook it for long. A 2018 study in the US journal Nutrients found that boiled garlic contained 16 per cent less allicin and roasted garlic 30 per cent less than raw."

It's also worth steering clear of pre-chopped garlic stored in oil or water, as there's evidence it also has lower allicin levels, adds Goggins.