Marie Curie is the largest charitable provider of end of life care in Northern Ireland, providing home-based nursing for people with terminal illness. Among the many families it has helped is that of Ann Kelly from Omagh, who died in 2019. Ahead of a fundraising Twilight Walk event tomorrow, we hear from her son Michael, as well as a Marie Curie nurse, about why the charity's work is so essential 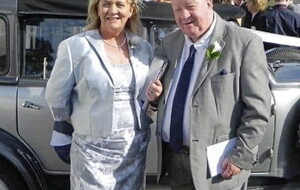 DEALING with a loved one who is at the end of their life can as overwhelming as it is heart-breaking. And those who are there to help us navigate this most uncertain and emotional time remain long in the hearts and minds of the family members who have been supported.

The Kelly family from Omagh showed their support once again last weekend for Marie Curie, the charity which provides end of life care for people with terminal illness in Northern Ireland.

Led by patriarch Michael senior, for the third year the Kelly family held another successful sponsored 3K/5K fun run and walk in aid of Marie Curie, whose nurses cared for his late wife Ann before she died in September 2019.

One of the couple's five sons, Michael, explained: "After my mother died, my father was absolutely determined that as a family we should do something to raise funds for Marie Curie in memory of my mother.

"And so Walk With Ann was born to coincide with the first anniversary of her death.

"People in our community around Omagh have been extremely supportive. My mother was so well-known in the area and the events raise more than £20,000 for Marie Curie.

"This year we did it under the auspices of the charity's Twilight Walk which aims to celebrate the lives of people who have died."

Mrs Kelly and her husband were heavily involved in the Strathroy Community Association and she organised activities such as summer schemes, youth clubs and after-school projects.

The grandmother worked for many years in the former Tyrone County Hospital and had celebrated 47 years of marriage just weeks before her death at her home.

The Kelly family were rocked when Mrs Kelly was diagnosed with a brain tumour in June 2018.

"She knew then that it was terminal and that surgery was – as the consultant put it – about 'buying time'," said Michael, who is the editor of the Irish Catholic.

"It was devastating news, of course first and foremost for my mother. She was a young woman of 64 at the time and very much looking forward to retirement and all that she and my father had planned ahead.

"It was also difficult for us to come to terms with as a family. We've been lucky as a family not to have experienced serious illness before this. The whole journey was going to be something very new for us."

Michael admits that even the language and the mechanics of how his mother was cared for was challenging for them all and they had to get up to speed medically very quickly.

"It's hard to wrap your head around the term, 'end of life care', because the term is itself so descriptive and so final. But the one thing we knew was that my mother was absolutely determined to die at home.

"Despite the fact that she worked most of her life in a hospital, she never really liked hospitals and certainly wanted to die at home in her own house.

"We were 100 per cent behind this and wanted to make it happen. But we knew that it would be a huge struggle as in the last months of her life my mother needed around-the-clock care."

Michael added that this is where the work of the Marie Curie nurses and health care assistants became "absolutely invaluable to us as a family".

"Their presence was an immense comfort to us and they were cheerful and answered every question that we had. They also allowed us as a family – and my father in particular – to get some much-needed rest.

"One of the things that is important to remember on a journey like this is that the family needs care and time to rest as well – we found the Marie Curie nurses very good at this. We are eternally grateful to them.

"It was also a comfort to know during the night that my mother had a caring person to look after her and tend to her every needs. It was a service that we really knew very little about but one that eased a very painful journey for us."

Mary Brown, the wife of Ulster Farmers' Union president David Brown, is one of the Marie Curie nurses who care for people in Omagh and through Co Fermanagh.

"What I enjoy most is knowing that I have been a small part of the team within the community that has enabled the family to keep their loved one at home if that was their last wish," she explained about her role.

"It's supporting family at a time when they are exhausted, they are so appreciative and trusting when they leave them in our care. Marie Curie is a charity that is highly regarded in the community, it's something that I'm very aware of every time I put on my uniform.

"In the Fermanagh and Omagh area, we have a great team of Marie Curie nurses and health care assistants who support each other."

Ciara Gallagher, head of fundraising for Marie Curie in Northern Ireland, emphasised how important these local sponsored walks and runs are in bringing funds for the service.

"Hosting a local Twilight Walk is a great way of supporting people dealing with death, dying and bereavement while helping the work of Marie Curie," she said.

"But more than that we know that it's often about remembering a well-known and respected local person, such as Mrs Kelly, or a colleague or a team mate.

"We know that some people prefer to hold their walk local, as in the case of the Kelly family, instead of going to the main Belfast event which is on tomorrow night (September 30) and we like to support these as well.

"We are here to support your walk done in your way and your own time and provide lanterns to light at the end in what is always a poignant moment for those taking part."

:: Find out more about Marie Curie's end of life nursing service and how to fundraise at mariecurie.org.uk.

:: The Twilight Walk is at Barnett Demesne, Belfast at 7.30pm tomorrow.

How to protect your bones if you're a vegetarian