TV presenter Claire McCollum on faith, family and why she supports Parkinson's UK

Jenny Lee chats to Songs of Praise presenter Claire McCollum, whose father Sam lived with Parkinson's for over 12 years 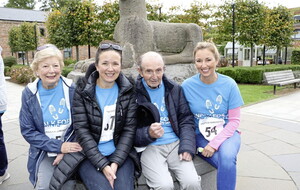 Claire McCollum with mum Margaret, sister Kelly and her late father Sam who took part in the 2018 Parkinson's Walk in Antrim Castle Gardens

"ASK questions, ask for help and think ahead," is broadcaster Claire McCollum's advice to families starting their Parkinson's journey.

This Sunday she will be taking part in Walk for Parkinson's at Belfast's Barnett Demesne – a four mile walk to help raise vital research funds for the progressive neurological condition.

Parkinson's UK is a charity close to her heart, following the death of her father, Sam McCollum, 18 months ago.

He was diagnosed with the condition 12 years before his passing, after noticing problems with his coordination.

"One of dad's hobbies was building large model aeroplanes. He was a real craftsman, but his fine motor skills were very much compromised," says an emotional Claire.

"In the last few years dad became more inmobile and in the end was in a wheelchair. But he still had the same wonderful sense of humour and faced each day with amazing courage."

As a journalist she admits it was her natural instinct to ask questions and find out as much as possible about the condition when her dad was first diagnosed.

"I never once thought 'Isn't this awful that dad has this', because that would just have been wasted energy. I wanted to know how we could deal with it and make the situation a little bit easier for dad and mum," says the 48-year-old, who encourages any families affected by Parkinson's to reach out for support.

"Speak to your GP or pick up the phone to Parkinson's UK," says Claire, who is grateful to the support the charity has given their family by phone and through a local monthly support group in Newtownabbey.

"It can be very difficult for someone who has just been diagnosed to go along to a group at first, where you may meet people who are at a much more advanced stage in the disease. But the support is so valuable.

"Mum faced Parkinson's almost as much as dad. Like anything in life, if you know you are not alone and you can talk to someone who fully understands what you're going through, it can be an amazing help."

Claire also gives families very practical advice when it comes to thinking ahead to the future, including in their case installing a lift.

"We were very grateful for all the adaptations that happened in mum and dad's house because it meant that dad could stay at home, in the place he felt safest, right until the end."

Parkinson's is the fastest growing neurological condition in the world. It affects 3,900 people in Northern Ireland.

The condition develops when nerve cells in the brain that are responsible for producing the chemical dopamine start to die.

Without it people can find that their movements become slower and make everyday activities, such as eating and getting dressed, difficult.

Parkinson's has over 40 different symptoms, from tremors and involuntary movements to pain and anxiety.

Claire's father also developed Parkinson's dementia towards the end. But she is hopeful for the future, with three trials for new treatments currently ongoing.

"Not one single patient has the same symptoms as another, which makes finding a cure tricky. But there is so much research into helping with different areas of the condition," she says.

The new ITV drama The Suspect, starring Aiden Turner, tells the story of a clinical psychologist who has been diagnosed with Parkinson's at 42, highlighting the fact that Parkinson's can develop at any age.

"Dad was 79 when he passed. It's an incredible sideways blow when you're diagnosed with a degenerative condition that is not curable, at any age, but especially when you are so young," adds Claire, who being reflective takes away some positives from her father's illness.

"It has taught me patience and it taught me love. I've watched mum and dad care for each other in the most amazing way and that was such an example of love to witness."

This summer, fashion and home products retailer Next launched its third Parkinson's UK collection. The brainchild of young Next designer Genna Douglas, who herself has early onset Parkinson's, the new edition of clothing and homeware is by English designer Eleanor Bowmer.

Entitled Let Love Shine, the collection is about positivity and making people smile and aptly Claire was asked to model the Love T-shirt.

Her first foray into broadcasting was on Ronan Kelly's breakfast show on Downtown Radio. She then moved to UTV, making her mark in the sports department, before deciding to leave in 2009 to bring up her young family and become a freelance broadcaster and event host.

Claire admits she has "done all sorts" since, including presenting Proms in the Park and Children in Need. In 2014 she joined the presenting team of BBC Songs of Praise.

"Getting to travel with work has been wonderful - a huge highlight was going to Kenya with Songs of Praise, with a potato farmer from Donegal," she laughs.

Claire met legendary boxer Muhammad Ali, whom himself lived with Parkinson's for 40 years, at the World Special Olympics in Dublin in 2002.

"He was a special guest and although unable to chat at that stage, I spoke to his wife. He was a great hero of my dad's and later when he developed Parkinson's I would remind him he was in good company."

Although she has interviewed many famous sporting figures, Claire admits it's "the everyday people who allow you to share their stories that mean so much more".

"One of the things I love about working at Songs of Praise is hearing people's personal stories. They are granting you their time and sharing their story and it's a privilege."

Claire reveals it was her dad that influenced her career choice. "Dad was a surveyor, but his main hobby was photography and film. He used to film family weddings and birthday celebrations and he would always get me to be his reporter. He knew I was game and I always felt at home asking the questions and speaking to the camera."

She was proud that her dad had his moment in front of the camera as well, when he featured in one of her very first Songs of Praise programmes – an episode for Father's Day where they were featured walking along Jordanstown's Loughshore.

In her next Songs of Praise broadcast Claire will present a special on Christianity in Co Down. She speaks to former BBC political correspondent Martina Purdy, who is now a Poor Clare based in Co Louth, about her pilgrimage. She also visits Grey Abbey to learn about the Cistercian monks and meets artist Aly Harte, who speaks about how her faith inspires her work.

Claire attributes her own personal faith for helping her cope through and after her dad's Parkinson's illness.

"I'm quite similar to my dad in that I have a quiet faith. I have been brought up going to church, but I've definitely leaned on it more," she says.

"Dad always said that things have a habit of working out. I don't think he's gone too far. He will always be with us," adds Claire who will be joined by her family at the Walk for Parkinson's.

"I have hosted various events for Parkinson's and do what I can for the charity. In 2018 a 30-strong group of us, including my sister's family, came over to do the walk at Antrim Castle Garden's. Dad was still walking at that stage and made it all the way round. We have found memories of that day."

You can support the work of Parkinson's UK and donate to Claire's Walk for Parkinson's at Tinyurl.com/4wh6nb25. For further information and support visit Parkinsons.org.uk or telephone 0808 800 0303