Age-related macular degeneration is a leading cause of sight loss, with treatments including regular injections into the eyeball. A new drug could transform how the condition is managed, reports Julie Cook 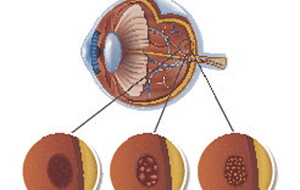 EVERY six weeks, former company secretary Margaret Mason feels a sense of dread as she prepares to go to hospital for an injection into her eyeball.

She finds the experience not only nerve-racking but painful - yet it is something she must do to preserve her failing sight.

"I absolutely dread it," says Margaret (71). "Having a needle in your eyeball is not pleasant, but I go as I don't want to go blind."

But soon, she and hundreds of thousands of others may be spared this ordeal thanks to a newly approved treatment.

Margaret has age-related macular degeneration (AMD), one of the leading causes of sight loss in this country.

It's a common complaint, affecting some 600,000 people in the UK, and occurs as a result of damage to the macula, the middle part of the retina, the thin layer of tissue at the back of the eye that turns light into signals for the brain.

There are two forms of AMD - dry and wet. Dry is the early stage, when the macula, which processes sharp central vision, begins to degenerate causing vision problems. In five to seven per cent of cases this will progress to wet AMD, when new fragile blood vessels form in the eye to try to repair the damage to the macula, but start to leak.

"With age, there's a degeneration in the macula and this leads to a build-up of by-products causing little areas of thickening," says Professor Ian Pearce, a consultant ophthalmologist at Royal Liverpool University Hospital.

"This accumulates in the back of the eye, which can lead to blurred vision or a blind spot. This is when prompt treatment is needed. As a general rule, time from suspected diagnosis to treatment is within two weeks. If you don't treat it that fast, you can end up with permanent damage."

The treatment for wet AMD is regular injections, every four to eight weeks, of anti-vascular endothelial growth factor (anti-VEGF), which stops the abnormal growth of tiny blood vessels that can destroy the retina.

The drugs, such as ranibizumab (brand name Lucentis), contain an antibody that stops chemical signals that prompt the blood vessels to leak and grow - they can slow the progress of the condition and even improve vision slightly.

"The problem is the antibody wears off after a few days and the blood vessels start to leak again, so many patients need repeated injections for many years," says Professor Pearce.

And this is an issue, as many patients find the injections painful and a source of anxiety. Then there's the burden of frequent hospital visits to have them.

But in a major breakthrough, the NHS drug spending watchdog, the National Institute for Health and Care Excellence (NICE), recently approved the use of a new drug - called faricimab - which only needs to be injected once every four months, rather than every four weeks, and is just as effective as anti-VEGF drugs.

NICE says up to 300,000 people in the UK could benefit from the new treatment.

"Faricimab works well at early stages of wet AMD, when the blood vessel leakage is small and has not led to scarring or damage to retinal cells," says Praveen Patel, a consultant ophthalmologist at Moorfields Eye Hospital in London, and the chief investigator on the trial that persuaded NICE to approve faricimab.

"It can also lead to an improvement in vision if the light-detecting cells in the macula have not died away, or have not been affected by scarring," he adds.

"We tend to see large improvements in vision in up to one in three people, though patients with very severe sight loss tend to have scar tissue in the macula or damage or loss of light-detecting retinal cells."

The Macular Society believes faricimab could transform treatment for many patients.

"Hospital trips - sometimes every four weeks - can be arduous and patients often have to rely on the support of friends and family," says Cathy Yelf, chief executive of the Macular Society.

"If this happens, it will preserve my sight and I won't have to go as often for injections," she says.

Injections every six weeks have been part of Margaret's life since 2021. She was diagnosed with dry AMD in 2016 during a routine appointment. "The optician said: 'I'm afraid you have AMD and you will lose your sight.' She handed me a leaflet and sent me home."

Within a year her AMD had progressed from dry to wet and her eyesight had deteriorated to the extent she could no longer drive.

Anti-VEGF injections have helped but she says she will welcome the new treatment: "Having less regular injections is going to improve people's quality of life no end."