Do we really need to start wearing masks all over again?

More infectious strains of Omicron are driving a surge in Covid cases. As other countries start to make face coverings mandatory again, should we be doing the same? Thea Jourdan investigates... 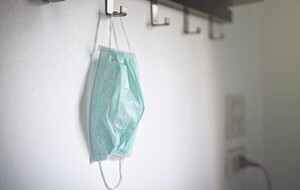 Most of us have stopped wearing face masks as often as we did at the height of the pandemic.

DO you still wear a face mask to go shopping, say, or on public transport? If so, you're in the minority - but for how long?

Most of us ditched masks months ago. But against a rising tide of cases, should we be masking-up again?

Infection rates are on the march across Europe, fuelled by Omicron sub-variants thought to be even more infectious than the BA.2 strain.

Governments are revisiting face mask guidance as a result.

France's former health minister Brigitte Bourguignon recently said people have a "civic duty" to wear masks in crowded places, such as on public transport, at work and in shops; German Chancellor Olaf Scholz has warned that face masks "will play a bigger role" in Germany in the coming months; and in Australia, Dr Kerry Chant, New South Wales chief health officer, last week urged residents to don a mask when they can't socially distance.

Meanwhile, the government of Cyprus announced it is to make it mandatory for people to wear face masks when indoors.

So should we follow suit? Cases are, after all, rocketing - partly because the new strains of Omicron, BA.4 and BA.5, appear to be more transmissible than earlier versions.

That's because changes to the protein on the spike of the virus make it easier for it latch on to host cells, so it is better able to evade immunity from vaccines and previous infections.

Cases have soared and hospitalisations are also rising, with GP surgeries, care homes and hospitals emphasising the importance of wearing masks.

But should those rules change not just in healthcare settings, but also for places such as supermarkets, cinemas or restaurants?

Danny Altmann, who is a professor of immunology at Imperial College London, believes this is now a necessity.

"Most of us working on Covid-19 were incredibly surprised that masks have not remained mandatory in healthcare and very strongly advised in other enclosed settings, such as schools or public transport," he said.

He wears a mask whenever he is in a public area and in close proximity to others, raising it only to drink or eat. "We are in the grip of a major wave and BA.5 is massively more transmissible than the early waves and is causing some quite serious illness," he adds.

There isn't only a risk of illness and hospitalisation but also of developing debilitating long Covid, which causes symptoms such as fatigue and brain fog that can last for months, adds Professor Altmann.

"There have been nearly three-quarters of a million new long Covid cases during the so-called 'mild' Omicron wave of 2022. Why would you take the risk of not wearing a mask?" he says.

It's a contentious subject - so much so that one consultant surgeon at a teaching hospital in England who opposes the reintroduction of mask-wearing would speak only on condition of anonymity for fear of criticism from patients and colleagues.

The surgeon said: "I know it's not a popular view, but I think we need to ditch masks unless you are in a medical setting. We have to learn to live with this virus.

"The fact is that most people will have no symptoms or minor illness if they are infected with Covid, and we have a successful vaccination programme and drug therapies to relieve more serious symptoms."

These therapies include antiviral medicines such as nirmatrelvir, ritonavir, remdesivir and molnupiravir, which are available to people at risk of getting seriously ill from Covid-19. This includes people with Down's syndrome and patients receiving some cancer treatments.

There are, the surgeon says, solid arguments against masks.

"Mask-wearing can give people a false sense of security so they don't take precautions such as isolating if they have symptoms," they said.

"Covering faces all the time leads to poorer social interaction and people's ability to recognise and identify others. It can lead to some people feeling isolated, particularly the elderly, who may already have difficulty with poor hearing."

Dr Michael Lewis, a reader in the School of Psychology at Cardiff University, agrees that mask-wearing affects how people interact.

"Most obviously, it is more difficult to interpret facial expressions, but this effect is reduced somewhat by people using the top half of their face more in order to communicate - for example, people smile with their eyes more when wearing a face mask," he said.

Children wearing them in school could, however, be affected, he says: "Face masks in an educational setting can act as a barrier to learning, but the data is not conclusive on this."

People with sensitive skin may develop rashes caused by chemicals used to sterilise disposable masks such as formaldehyde, according to tests carried out at Hamburg Environmental Institute in April 2021.

Meanwhile, a study concluded that "prolonged use of N95 and surgical masks by healthcare professionals has adverse effects such as headaches, rash, acne and impaired cognition in the majority of those surveyed", reported the Journal of Infectious Disease Epidemiology in 2020.

However, for many people, face masks never went away. Around three in 10 adults (27 per cent) across the UK reported always or often maintaining social distancing, and roughly four in 10 (38 per cent) said they wore a face covering when outside their homes, according to ONS figures.

But do they really work? Despite billions of people wearing them to reduce Covid transmission, gold?standard scientific evidence - in other words, randomised controlled trials - remain thin on the ground.

Instead, the evidence comes mainly from observational studies, which look at samples of people without interfering or controlling them in any way.

According to these studies, there is a benefit to wearing a mask. For example, a review of public health measures published by the BMJ in October 2021, looking at 72 observational studies of nearly 400,000 participants, found a 53 per cent reduction in Covid-19 incidence from wearing masks.

And a study in the journal Science in May 2021 showed that even home-made masks stopped larger virus-filled droplets being passed on from an infected person wearing a face cover.

However, the type of mask you need varies according to your environment.

Yafang Cheng, head of a Minerva Research Group at the Max Planck Institute for Chemistry, reported that masks became less efficient if the air is full of virus droplets, as in a Covid ward. In this case, more advanced masks (N95/FFP2) would be required.

Most people wear disposable 'surgical' blue masks comprising three layers of synthetic materials that act as a filter to particles and droplets.

Professor Altmann wears a higher grade of mask, and not just on hospital wards.

"I wear a high-grade N95 mask in any indoor public setting, except when I have to take it down to drink coffee, for example," he says. "In that situation, I make sure we are well spaced in an airy place."

An N95 has a filter and the edges form a seal around the nose and mouth. In his opinion, the German move to make these mandatory indoors is the correct one.

"That's precisely what we should be doing," he says. "Sadly, the UK is doing badly: high caseload, antibody levels have waned since the boosters, and a poor rollout and uptake of fourth doses."

Dr David Strain, an honorary consultant in medicine for

Foundation Trust in Exeter, doesn't believe masks need to be mandated by law because "most people are reasonable enough to put on a mask in a GP surgery, a hospital or on public transport".

Professor Altmann, however, believes the need to return to mask-wearing is urgent. He says: "We are heading through the summer into autumn in a precarious state, and masks could make that marginally better."

Hate aubergines? Five dishes to change your mind now they're in season