Casual Gardener: Dare to be Wild 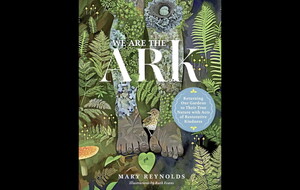 A new book from a Chelsea gold medal winner aims to put nature at the heart of our gardens...

WEXFORD-BORN garden designer Mary Reynolds was a mere 28 years old in 2002 when she was awarded a gold medal at the Chelsea Flower Show for her garden, Tearmann Sí - A Celtic Sanctuary.

Her naturalistic creation, enclosed by a weathered drystone wall, drew its inspiration from, among other things, the Hill of Tara and elements of Celtic mythology.

The story of her award-winning garden and Mary's subsequent campaigning was the subject of the 2016 film, Dare to be Wild, which by her own admission didn't merit any Oscar nominations.

The film, described by one critic as "sappy in every sense", casts our heroine as an outsider who succeeds against all odds to convince Chelsea's conservative judges that a wild garden can match and even surpass the more conventional designs that normally win the plaudits. In recent years, the style Mary pioneered two decades ago has become fashionable but if anything she is now even more of an outsider.

She tells The Irish News how she's "been talking myself out of a job for years" by spurning the corporate sponsorship and big money deals enjoyed by many of her contemporaries and instead focussing on a style of gardening that jettisons the usual rules about controlling nature.

In her latest book, Mary explains the epiphany she underwent one day after watching wildlife being displaced from a nearby building site that was being cleared by a digger.

"I had done this myself so many times, in so many places," she writes.

"For more than 20 years I had been working all over the world as a garden designer, carrying out similar unconscious devastation everywhere I worked."

In response, she founded 'We are the ARK', a movement whose message about restoring nature's place at the heart of every garden now has global reach – "from a window box in Norway to a thousand-acre ranch in Texas".

"The aim is to reimagine the gardening industry and how people interact with the landscape, in a way that is actually beneficial, as opposed to just treating the land as a kind of blank canvas for our own artistic endeavours," she says.

"So many people feel kind of hopeless and overwhelmed by the mess we've made of the planet and our very simple message is to start with your own patch."

Mary no longer has time for cultivars and non-natives, and instead advocates gardening using solely indigenous flora.

It's a radical idea but one that doesn't rely on compromise in the way many gardens and gardeners who claim green credentials do.

"They've tried their hardest to get me to be part of the greenwash," she says of the horticulture companies who've sought her endorsement. "I don't know how much money I've been offered to be a corporate puppet, but I refuse to take it because I know how much trouble we're in."

Her new book – also called We Are The ARK – is a beautifully illustrated (by Ruth Evans) guide to what vital steps you must take if you are to embrace the group's restorative ideals.

Whether it's a private garden or a public park, any patch can be transformed into a sanctuary, which when combined with others in the network has the potential to stretch right around the world.

"People really love their gardens, and I don't want them to feel like I'm attacking them," says Mary.

"I'm just offering an alternative – and if you want to be part of the solution, this is the alternative."

:: We Are The Ark by Mary Reynolds is published by Timber Press.

Casual Gardener: Dare to be Wild

Gardening: Save money by making your own Christmas decorations with garden trimmings