Casual Gardener: Every rose has its thorn 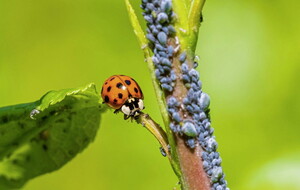 Aphids are swarming in early summer before ladybirds can fully help control their population. Picture by PA

The impact of climate change is leading a top rose breeder to retire some of its most acclaimed varieties...

THE MOST treasured addition to my garden this year has been Persicaria amplexicaulis 'Firedance'. It's described by the nice people at Ballyrobert Cottage Garden, from where it was procured, as "another trendy new plant from Piet Oudolf".

"Trendy it may be," the description adds, "but bad it is not – we've found it to be a good do-er and a versatile cultivar in a few different parts of our garden".

I planted my nine mail order plants back in June, so it'll be a year or two before they reach maturity but they're settling in nicely. Notably, in recent weeks their distinctive and highly desirable salmon-red flowers have been on display too – in November – which means they are potentially in flower for five-six months. I was feeling particularly satisfied with my purchase when I noticed another unseasonal bloom nearby – this time a mauve opium poppy of the kind more readily associated with high summer. Add to the list the deep red rose in my parents' garden that produced a textbook flower last weekend and you'll see there's a pattern emerging – summer bloomers flowering just a matter of weeks before Christmas.

We can assume that the spell of particularly mild weather we've enjoyed recently has had something to do with it. Earlier this month, the Met Office recorded overnight temperatures of 14.6C at Magilligan in Co Derry, the north's warmest November night on record.

Average night-time temperatures at this time of year are usually in the region of 4-6C. The meteorologists say the reason for the comparatively high temperatures is due to the jet stream and, more specifically, to the direction of the wind.

It would appear a south-west wind is dragging air from the Tropics, around the Azores and Cape Verde, where it is still warm at this time of year, and that milder air is spreading north.

On one hand, the mild temperatures are welcome, especially in the midst of a cost-of-living crisis that makes us think twice before firing up the central heating.

However, there can be a downside to what is effectively an environmental transformation in a relatively short space of time, with many of our traditional garden favourites unable to cope.

Last week it emerged that many roses from the famed David Austin stable are being removed from sale because they are no longer practicable to grow in current conditions.

Take for example Munstead Wood, a strong, old shrub rose with velvety, crimson flowers, introduced a mere 15 years ago. It is being "retired" along with a number of other David Austin roses due to what the company, which has been striving for 60 years to produce the "most beautiful and disease free" roses, terms "environmental changes".

"We cannot stand still and observe as we see diseases and pests evolve as conditions and climates change, threatening the health and success of some of our most popular varieties," a spokesman told The Irish News

"We are passionate about being custodians of the rose and are committed to doing everything we can to guarantee our customers plants that thrive, thereby safeguarding the future of the rose."

The pests and diseases spreading due to climate breakdown include rose black spot, powdery mildew and rust, and aphids swarming in early summer before ladybirds can fully help control their population.

While all this is bad news for gardeners, we should also regard the David Austin Roses as the canary in the mine – if that's not stretching the metaphor too far.

Casual Gardener: Every rose has its thorn

Gardening: Give your outside space festive sparkle by lighting it up in winter