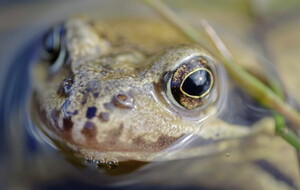 A timely intervention will keep your wildlife pond healthy...

FEW things will transform your garden quite like a pond – and if it's wildlife pond then it's a win-win, for both you and all the mammals, birds and amphibians that will take advantage of the watery habitat and its immediate surroundings. Ornamental ponds that provide a home gold fish or koi carp are all well and good but when it comes to encouraging biodiversity, it's best to follow nature's example as closely as possible.

Your pond or water feature doesn't necessarily have to be that expansive – though the bigger the better – as the likes of a Belfast sink or half barrel will provide a good home for a few aquatic plants, which in turn will attract various creatures, from water boatmen, snails and sticklebacks to frogs and even newts.

However, creating and maintaining a wildlife pond that's sustainable isn't as easy as it may sound. More often than not if you leave a body of water to its own devices it will become stagnant or overgrown with duck weed, which ultimately will deprive the water of oxygen and kill off most of the life below the surface.

Decaying organic matter such as leaves and other plant matter also pose a threat to pond health as they will release gases and reduce the amount of oxygen in the water, which is potentially harmful to the inhabitants, turning the water black and smelly. If you have running water or a powerful pump the problem will be less severe.

An intervention in the autumn, however, will help mitigate against such occurrences. In some circumstances this may merely involve trimming a few marginals and netting debris off the surface but if your pond is situated near to trees, then you way need to don waders or a wetsuit. Be wary of removing too much silt from the bottom of the pond as this will be where many creatures will choose to lay their eggs or hibernate. It's about striking the right balance.

The idea is to gather as many of the fallen leaves as possible, using a net or a scoop. The foliage of plants like flag iris and water lilies should also be removed as they too will decompose and release gases. Any plants that are removed should be left at the side of the pond for a day or two to ensure that any critters who had made the leaves their home can find alternative accommodation.

If you're really on the ball, you can stretch a net across the surface which will catch fallen leaves before they enter the water. However, leave any oxygenating plants in the water as they will still continue to help maintain the pond's healthy balance over the winter months. If they are becoming unruly and in danger of over-running the pond, then wait until spring before removing them.

Snow and ice are rarely a problem in my garden because I live within earshot of the sea and therefore enjoy a mild micro-climate. Further inland and at a greater altitude, the chances of your water freezing are much greater.

In very icy conditions frogs can die from 'winterkill', so float a small ball on the surface that will prevent the water from freezing. Never use salt, antifreeze or chemicals and avoid smashing ice on the surface as the shock-waves can kill wildlife, while ice shards can puncture the liner.

It's important to remember that in severe winters, despite your best efforts, frog deaths are almost unavoidable.

Gardening: How to add rose hips to your winter displays

Casual Gardener: Make your own luck when it comes to protecting plants from pests and pathogens