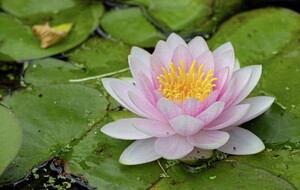 If only all plants bloomed as long as the water lily...

IN the garden the remnants of summer remain for a while after the schools have gone back – if we're lucky right up to the autumn equinox on September 23. If you've chosen your plants carefully, then some will be at their best next month, the abundant, bright flowers of rudbeckia, asters and globe thistles enabling us to almost deny the onset of autumn. Gardeners are always on the lookout for a plant whose flowers outlasts the season and I believe I may have found one. However, the drawback is it's an aquatic and at the very least you'll need a half barrel in which to house it.

Almost as big as a side plate, the flowers on the biggest of my water lilies – variety not known – first appeared in early July and the same blooms have remained, perfectly intact, closing late in the day and opening again for the morning sun. They remind me of rhododendron flowers, magnificent in scale and colour yet much more enduring, with those that you can get your nose close to giving off a light fragrance. Those dinner plate-sized, palmate leaves are also worth mentioning. They not only provide architectural interest on the surface but also fulfil a functional purpose by shading the water and preventing it from getting too warm, which can turn your water feature into a sterile soup. With the tropical giants like Victoria Amazonica, the leaves can reach up to 3m in diameter.

There's a number of prerequisites for growing water lilies, the most obvious of which is, of course, water but this doesn't mean you necessarily need a pond, as a mini pond in the shape of an old Belfast sink or the aforementioned half barrel will give you sufficient water volume to host a dwarf variety at least. The other prerequisites are adequate sun and reasonably still water, as lilies don't like to be troubled by the ripples from pumps or fountains.

If your pond has a natural or clay bottom then the lily will root itself. However, in most cases the primordial-looking rhizome from which the plant grows will need to be contained within a basket that rests at bottom of the pond. They are best planted, or placed, in early spring with slow release aquatic fertiliser added to the low nutrient growing medium. Experience tells me that they don't necessarily need to be anchored but where they float the leaves are more likely to bunch rather than lying flat on the pond surface.

After a few years the vigorous rhizome will probably need dividing with a sharp knife or old saw as it'll have outgrown its basket. This will also give you an opportunity to dispose of any rotten parts of the root which will be black or soft.

It’s important to get the right variety for your feature, as water lilies vary widely in vigour and could outgrow a small surface area in a matter of weeks. Make sure the ultimate plant size is suited to the water’s depth. Miniature and small cultivars are available. Nymphaea tetragona, the Chinese miniature lily, needs just just six inches of water, while the profusely flowering ‘Andreana’ needs four times that depth. The reliability of ‘Pygmaea Helvola’, which has small olive-green and star-shaped canary-yellow flowers throughout summer, is underscored by the RHS’s Award of Garden Merit (AGM). For a greater depth try 'James Brydon’ – another AGM holder – which is happy in partial shade and produces red flowers from June to September.

Gardening: Grow the perfect late summer blooms to cut for your home

Gardening: How to help smaller birds fight for their share in your garden