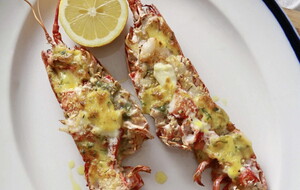 THIS week we hosted an event on sustainability at our new Waterman Events space, and I was asked to speak to attendees about our use of local produce, which is something I am very proud of as a restaurant owner and local employer.

Using local produce is the most sustainable thing any of us can do besides taking a minute off our shower time or lowering our heating dial a notch.

Buying local meat, fish, vegetables and even jams can make a big difference - and eating within the seasons is key.

I know that over the years my restaurants have helped sustain many a local food producer, so next time you're shopping opt for the local eggs, chicken, flour or oats. Both of this week's recipes are brought to you using Kilkeel crab and lobsters.

3 large crabs - separate the brown meat from the white meat

Mash the brown crab meat with the nutmeg, season with salt and pepper and spread across the base of the pre-baked pastry case.

Heat the butter in a frying pan and cook off the shallots until translucent. Add in the watercress, and fold into the onion, mixing well. Cook until wilted and place on top of the brown crab meat.

Beat the eggs into the sour cream and double cream in a bowl. Add in the white crab meat and ladle into the pastry cases.

Bake in oven at 190C for 60 minutes until pale golden brown. Once cooked, remove from the oven and leave to sit for 30 minutes before serving. This will help the egg set. Serve with a watercress salad.

Bring a large pot of water to the boil, seasoned with salt. Place the lobster into the large pot and cook for 10 minutes. Remove and leave to the side and cook.

In a second pan place in the white wine and shallots and cook until most of the liquid has evaporated.

Add in the fish stock and cook until most of this has evaporated. Add in half of the double cream and mustard and cook out until it has cooked out by half. The liquid should be thick enough to coat the back of a spoon.

Add in the cheese and whisk until the mixture is smooth. Season the sauce to taste with salt and pepper.

With the rest of the double cream, add to a bowl and whip up. Once it has become light and makes soft peaks, fold in the egg yolk, and then fold into the cheesy liquid sauce.

Pre heat your oven to its highest setting 220C.

Now that the lobster is cooled, place the lobster top side up, facing you so that you can see a cross in its back. Using a sharp heavy knife place the point in the centre of the cross and holding the head slice through the shell to the tail. Repeat on the head side.

Rough chop the meat and add to your sauce. You want to retain a meaty texture so keep no bigger than 3cm chunks.

Place the meat back into the lobster shell and place on a roasting tray. Cook for up to 15 minutes until glazed. Remove from the oven and place under grill for 5 minutes, until the cheese is browning and bubbling.

Remove and serve with a crusty baguette.