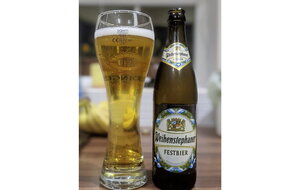 Weihenstephaner holds the distinction as being the world's oldest continuous brewery, having been founded in 1146

WHEN it comes tradition in beer, as with many other things, nobody does it quite like the Germans.

From state-owned breweries to laws guaranteeing quality, the country takes its beer very seriously. That's why the absence of revellers on the streets of Munich in late September over the last two years came as such as culture shock to the Bavarians in particular.

However, Oktoberfest is back this year, stretching from today right through to October 3 - which just happens to coincide with German Unity Day, which is a public holiday. That extends the world's most famous beer festival by a day, which will go some way towards making up for the last two years.

Of course, while getting our hands on some lederhosen may be possible, making the trip over to Munich may prove trickier for most of us. However, it's getting easier to source good German festival beer on these shores and last week I sampled some which I picked up in DC Wines in Belfast.

As well as their regular output, most Bavarian breweries will brew a special beer for Oktoberfest. Weihenstephaner holds the distinction as being the world's oldest continuous brewery, having been founded in 1146. However, unverified sources suggest beer had been brewed on the site for a few hundred years before that.

Their Festbier comes in a 500ml bottle and pours a crystal clear, golden colour in the glass. It's a clean and smooth 5.8 per cent lager, but has a bit more body than your average lager and there are floral tones to it and sweet and light taste.

Remember, festival beers are brewed to accompany traditional foods like wurst, pretzels and sauerkraut, so there's no need for something that's going to dominate the palate too much.

Next up was Wies'n-Märzen, a 5.8 per cent Märzen lager from Flötzinger Bräu. This is also a festival beer, but one that is brewed for the Rosenheim Autumn Festival - a more low-key version of Oktoberfest in the Bavarian town of Rosenheim where the brewery is situated.

It's a classic Märzen with a slightly sweeter and more pronounced malt profile than standard lagers. That gives it a greater depth of flavour, but it is still clear and golden in the glass with a foamy white head.

Now all you need are some pretzels and sausages. Don't worry about the lederhosen though.