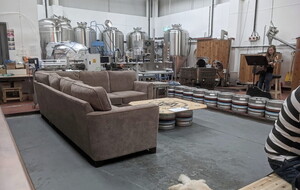 LOCKDOWN forced many of us to form a greater bond with our sofa and enjoy some beers at home. Of course, if you are a craft beer drinker in these parts, then drinking at home is often preferable to relying on the paltry choice available at the vast majority of pubs here.

Comfort is key for many but choice features highly when it comes to home drinking.

However, thanks to the (admittedly slow) progress made on licensing laws here, a brewery's ability to stage a taproom has increased and that's how I found myself relaxing on a sofa, drinking top class beer and listening to relaxing live music on the premises of Mourne Mountains Brewery last Saturday.

I've visited the brewery on a few occasions before, but this was the first time I'd actually got to relax and drink a beer in it and deluge of rain last weekend made it the perfect spot to escape to.

The vibe, just like the beer, was well chilled as punters and their pooches enjoyed each other's company, had a nostalgic play of Super Mario Kart on the N64 console and enjoyed some fresh beer.

On tap were a couple of new brews as well as a few of the old reliables and although my curious palate was drawn towards the newer names, I also enjoyed a freshly-pulled pint of Mourne Gold, which was much hoppier and sweeter than the canned version and washed down the delicious pizza from Dinzi's of Warrenpoint.

It was then on to Mourne's new 4.8 per cent witbier Sundowner, which was imbibed a lot earlier than the sun would have gone down had it not been obscured by thick grey clouds. It poured a gold colour with a white head and ticks all the witbier boxes.

There are subtle flavours of orange peel and banana and a little hint of spice, but this is quite a sweet and refreshing number and goes down rather smoothly.

Next up was Aurora, a strawberry and raspberry sour which didn't go on general sale until this week, so it was nice to get a sneak peak.

It pours a deep red colour with minimal head. The tartness is not overly pronounced but does help to balance out the fruity flavours of the strawberry and raspberry. This one clocks in at 5.5 per cent but drinks a lot lower than that.

After sampling the remaining draught delights on offer, things got hazier than a New England IPA but for comfort and choice, it's hard to beat a trip to the 'local'.