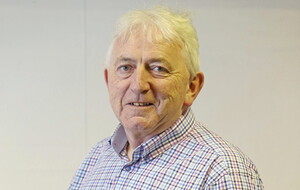 ENTERING year's end, and the official start to winter, our weather has growled only briefly so far with a couple of sharp frosts and reluctant cold winds.

In our northern hemisphere, December 1 marks the beginning of meteorological winter, but for astronomers, the winter solstice signals the start of the season, a time, linked to the earth's orbit around the sun, which occurs this year on December 21.

Then, as the Latin 'solstitium' suggests, the 'sun stands still' before appearing to change direction and we lean forward towards its rays. Although the 'shortest day' gives the fewest daylight hours of the year wrapping us in darkness, it also marks the point, beyond which daylight begins to slowly increase.

Watching a flock of redwings on a hilly landscape recently, light featured prominently as a strong low sun caught their distinctive white eye-stripes, streaked breasts and emphasised the red underwings and flanks. As the birds made off from a bare ash tree, a south easterly breeze carried them onward, having arrived here from Iceland or Scandinavia for the winter months.

Poet John Clare, wrote of them as birds, "That come and go on winter's chilling wind". Irish names for the bird also reference this winter association with Deargán sneachta, the red snowbird, and Siocán, a variation of sacán, the frost bird, both used.

The size of a song thrush or blackbird, redwings feed mostly on invertebrates and berries. The vocal 'tseep' call is noticeable as they fly with other thrushes especially the fieldfare, another winter visitor from the east.

Turdus iliacus has had other names, including red-sided thrush and wind thrush but its familiar name of redwing first appeared in The Ornithology of Francis Willughby (1678), a book exploring English and folk names for birds.

A folktale from the fishermen of Dover and Folkestone tells the story of 'the herring spear' or 'herring piece', rustling sounds heard overhead out at sea on still winter nights. The sounds are caused by nattering flocks of redwings as they cross the water on their way to warmer shores.

The flying birds, intermittently block out the stars while the fishermen listen in awe to the eerie sounds, regarding them as a good omen for their catch.

After the winter thrushes had moved on, the light then presented me the opportunity to appreciate a lone magpie, bird of much mischief and thieving intent.

Although easily recognised by its black and white colour and long straight tail, this member of the crow family shows a green blue, almost turquoise sheen under good light, elevating the bird's colour to that of its radiant cousin the jay.

One of the bird's many Irish names, 'Pocaire na mbánta', hopper of the fields seemed wholly appropriate for the one I watched hopping two footed across the soft pastures in search of grubs, before cackling off.

Now a widespread species throughout Ireland, magpies were once absent, the current population believed to be descended from a flock which arrived in Co Wexford blown across the Irish Sea by a strong east wind in 1676.

Historian and priest, Gerard of Wales, was one of the first to mention the absence of Pica pica in his 12th century work Topographia Hibernica. Later, English historian, Fynes Moryson, also noted from his travels around Europe in 1617, that Ireland had no "chattering pye".

The magpie's arrival since has brought with it much folklore and stories of roguish exploits.

As the sinking sun began to lose its powerful rays, I felt grateful for its earlier glow, helping to show off the rich colours of both birds.