Leona O'Neill: A generation after the Good Friday Agreement, why is hate still stopping us become a shared society?

Sectarianism remains a depressingly persistent feature of life in Northern Ireland in 2022. The hatred and distrust that we held for one another during the worst days of the Troubles seems to be seeping into the next generation, says Leona O'Neill 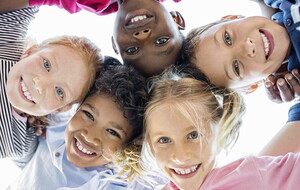 Children in our society deserve a present - and future - free from sectarianism and stoked-up fear of 'the other'.

THE defacing of a billboard on the Crumlin Road in north Belfast advertising an Irish language programme is yet another example of why we can't have nice things here.

Under the cover of darkness, angry grown men took to the billboard – which was advertising Cúla4, an Irish language television channel geared towards Irish-speaking children – and sprayed 'UVF, UDA, Kill All Taigs' across it.

They scrawled this message of hate under an image of three youngsters laughing and smiling. What a message to send to young children drawn to the bright colours and the smiling faces of those pictured – hate trumps joy in this part of the world.

Sectarianism is rife in Northern Ireland in 2022. The hatred and distrust that we held for one another during the worst days of the Troubles seems to be seeping into the next generation, aided by those for whom hatred in their default setting. It's so sad to see.

I'm a Catholic and when I was growing up I didn't have any Protestant friends. I lived in a predominantly 'Catholic area' and I went to a 'Catholic school'.

When we socialised we went to places in 'Catholic areas'. Not because we didn't like Protestants, but because we were kept apart - the Troubles were raging and that segregation was completely normal.

I remember back at school we were due to take part in a netball tournament and were matched with another school in the, at the time, predominantly Protestant Waterside.

Our school bus wouldn't start and the decision was made that we would walk to the school. The teacher stood at the top of the bus and told us to change out of anything that would identify us as Catholics, to hide any school emblems for the journey there and back.

Of course, we thought absolutely nothing of this, because it was completely fine to think that you might be attacked purely because of your religion.

I remember us girls walking through those streets, Union flags on the lampposts and loyalist murals on the walls, like we were strangers in a foreign land, not folks who were merely one mile from our own homes.

I know I'm not unique in that I didn't properly meet and become friends with someone from the 'other side' of the community until I went to college in Belfast.

We just didn't get a chance before then. We were constantly kept apart in our communities, educational and social settings, making it far too easy to demonise and dehumanise those from another religion.

What I found, when we were able to mix, was that my Protestant friends were exactly the same as us. They had the same fears, the same distrust that had been handed down to them.

They had never met a Catholic before and were astounded to realise we were actually sound. That was in the early 1990s.

When we talked it out, as young people, we found the reason my Protestant friend distrusted Catholics was because he had no experience of us apart from the demonised picture that was painted for him by others, coloured also by the brutal violence of the day. And it was the same for me.

And these notions were perpetuated by some of our political leaders back then, for whom it was good strategy to keep us in our own trenches: 'Apart is better. Apart is safer.'

Sound familiar? It should, because it is the rhetoric still used today by malicious actors intent on keeping this sick society on life support. As they push their own agendas another generation will be poisoned.

Almost 25 years on from the Good Friday Agreement we haven't seen the full change we were promised. We were promised peace and part of that would be a unifying of our communities that would make scrawling of a hate message on a billboard promoting a kids' TV show so outrageous that the messengers would have been thought on as sad weirdoes by all sections of the community.

But here we are. Again. It's normal. Gaze on it and turn away. Laugh it off, belittle it, or make excuses. All is well. Carry on.

Leona O'Neill: A generation after the Good Friday Agreement, why is hate still stopping us become a shared society?

Ask Fiona: I'm struggling to cope with caring for mother-in-law