Mothers never stop worrying about their kids, even when they've officially become adults and it's time for them to leave the family nest and forge a life of their own, writes Leona O'Neill... 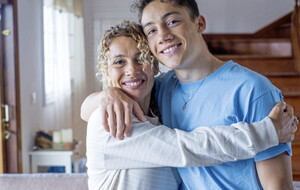 Mothers never stop worrying about their sons, no matter how old they are

MY SON sent away his university preferences last week and I don't think I'm prepared. I don't think I'll ever be prepared for him not coming home to this house every night. I don't settle until I know his head is safely on his pillow in his room.

It's an odd thing us mothers do – worry. It's ceaseless and it's quiet and it often goes unspoken. It's a thing that doesn't miraculously end when they turn 18: I know, because my mother still worries about me in my 40s.

Everything seems to be happening at once. My son turns 18 tomorrow. He will be an adult. I started writing this column when he was three weeks old. I wrote it with him sleeping on my shoulder, or beside me in his pram. I wrote when I hadn't slept. I wrote about him never sleeping for more than 10 minute bursts. I wrote about our trials and tribulations, about toddler tantrums, sickness, health, holidays, hospital visits, love and grief. I gave people an insight into our home and lives and the madness that parenting can bring.

I wrote about how we called him 'Captain Destructo' because he broke every toy, even the seemingly indestructible ones that manufacturers sent us, he was given. He flushed mobile phones and remote controls down the toilet, and stuffed bananas into DVD players (remember them?).

I wrote about the time I brought him to the doctor because his nose wouldn't stop bleeding and when I looked up there, there was some manner of growth. When I took him to a young doctor he looked at us worriedly and said he was going to send for an X-ray before an older doctor – who, I imagine, had met many a Captain Destructo – stuck a pair of tweezers up there and retrieved a fluffy art ball that the child had sniffed up when he was gluing them to pictures.

I wrote about the time we held a race car-themed birthday in our house: I gave them all cardboard boxes and paint to fashion cars from, and him and his two friends went out and painted all the windows of Granny's actual car parked in the drive.

I wrote about the time I had to sit in A&E for 10 hours with him with concussion after his mate hit him on the head with an iron bar as they were playing 'kill the Loch Ness monster' in his back garden. And the time I had to pay a neighbour £60 for fixing the window he broke with a football, and £80 for the light he accidentally smashed during his friend's birthday party at an activity centre. Or the million other things he broke by accident when his relentless, vibrant, effervescent energy overflowed over his 18 years.

I stopped writing about them personally before they reached their teenage years. I know we live in an era where everything is shared online, and parents post pictures of their kids from the minute they are born, but that wasn't for me. I talked about family, but a lot of stuff I kept just to ourselves, even their images. The reason the family picture above hasn't changed in 10 years.

My son grew up on these pages and is now an adult. I can't quite believe it. What I can believe is that I am so very lucky to be his mother and that the next steps on his journey of life will be exciting and so very full of that relentless, vibrant energy he entertained us, and you on these pages, with when he was a child. He's now a guitar strumming, maths loving, Oasis-mad party animal and – alongside his older brother and younger brother and sister – make my life joyful, lively, brilliant and so full.

I don't want to think about the time he'll take off and take that beautiful energy somewhere else, light up another house with noise and light and brilliance the way he does our home. For now I'm just going to enjoy celebrating this brilliant young man's 18 ceaseless fabulous years on the planet.

How to talk to your kids about vaping