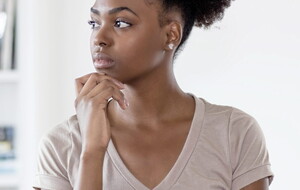 DO dating apps actually work? I been on a lot of apps and never get any matches. Should I just give up on trying to find any one date? I am 35 years old and don't really have a lot of friends. I moved away from home for work and don't know anyone where I live now.

FIONA SAYS: Recent surveys have suggested that a good number of dating app users go on to have a relationship that last – sometimes resulting in marriage. What's not clear is how long this took, and whether these people used phone-based apps or internet websites. So, yes, they do seem to work – but clearly not for everybody.

A common problem for users is being on a platform that is the wrong demographic for them. For example, someone over 60 trying to use a site that's intended for 20-30-year-olds. However, as you've tried several apps and not got a single match, I think it's more likely that it's your profile that's the issue.

Might you be being a bit too self-deprecating or negative? It can be a fine line between being truthful about oneself and seeming to be uninteresting or desperate. Also, a poorly chosen picture can deter many people. There's plenty of material on the web for advice about improving a dating app profile, or you could contact your current app for guidance.

I HAVE been married for 30 years to a lovely man and, until recently, we've always had an active love life. My husband is 58 and over the past year, he's got into a routine of getting up three or four times in the night to pee. I can't remember the last time he had a full night's sleep, and consequently he's tired all the time. I am disturbed a lot too and often end up having to move to our spare bedroom to get some sleep.

What bothers me more though is he is refusing to be intimate. He thinks he has a prostate problem and has read online somewhere that he won't be able to ejaculate properly and that this will make things worse. I have no idea whether he's right or not, but I do know we can't carry on like this It's been months since we were last intimate and, the longer this goes on, the more damage I feel it is doing to our relationship. Is he right?

FIONA SAYS: As ever, with medical stuff on the internet, it's very easy to only get part of the story and then misinterpret that information. There is a nugget of truth to what your husband has read, but it seems likely he has taken this out of context and scared himself in the process.

Many men your husband's age can expect some sort of prostate issue to develop, and this gets more common with increasing age. However, sadly for something so common, there is still a lot of ignorance and confusion about the issue.

Some of the more common effects are a need to urinate more frequently, coupled with the sensation that the bladder is never completely emptied. Sometimes men find that when they urinate, the flow stops and starts. They may also experience dribbling, even when they think they have finished. But, all of these symptoms can be alleviated with medication and sometimes lifestyle changes. As for the ejaculation issue, I think it's here that he's possibly misread things. Some men may need further interventions to help with these things – but that's not always the case and again, these things are often treatable.

Your husband, in common with lots of other people it must be said, may have jumped to a worse case scenario without even talking to a doctor. Please encourage him to do so. His frequent urination could be due to several things – some very minor, and some not necessarily prostate related. But it's important to seek a professional opinion. The sooner he sees a doctor and gets treatment if needed, the sooner he will start to feel and sleep better. His doctor can also reassure him that it's perfectly fine to resume the love life you had before.

WHY DO I DRIVE MEN AWAY?

I ALWAYS thought my boyfriend was perfect for me. We've been seeing each other for just over four years – that is, until he dumped me two months ago with no warning at all.

I loved him very much and always thought he felt the same way about me, as we had talked about getting married. I have no idea why, nor what I might have done wrong, as he won't talk to me. He won't respond to texts, calls or emails. He's changed his social media status and deleted any images that had me in them.

I have visited his flat a few times to talk to him but got no answer. The last time I tried, he did open the door but slammed it in my face the moment he saw it was me. I have now stopped trying, but it has left me feeling rejected, hurt and worthless.

Which probably explains why I agreed to go out with a guy at work who's been asking me out for ages, even though he knew I was paired up. We had a lively night out and I ended up drinking too much, which led to spending the night at his place. The following day, he couldn't wait to get me out of his flat and has been avoiding me at work ever since. Now I feel even worse than before. What is it about me that drives men away?

FIONA SAYS: Your boyfriend's behaviour was immature and hurtful, so please stop thinking that this somehow makes you worthless. What he did reflects badly on him, not you. If this is how he treats a potential marriage partner, you are better off without him. What you need now is some time to get over the hurt, look after yourself, and be with genuine friends and family.

To take your mind off the break-up, try to keep busy with interests or projects and avoid making any hasty decisions about your life until you feel truly ready. In this context, a rebound date with a colleague was perhaps not ideal. Relationships with colleagues can be fraught with problems at the best of times, but so soon after a break-up just compounds the issue.

However, please don't let the fact that he too appears to be rejecting you drag you down. If I am being charitable, it's possible that the break-up vibes you might have given made him uncomfortable. Alternatively, he might genuinely have thought that you were only interested in sex, not a relationship. Of course, it's equally possible that this was all about the conquest for him. Simply getting a date was enough.

Whatever the reason, if you are to move on from this, you need to put these events behind you. Focus on yourself, enjoying your time and building your own confidence. You might also find it helpful to speak with a Relate counsellor (relate.org.uk), so you can talk things through and explore your feelings. In the meantime, please stop blaming yourself.

DID GAMBLING MAKE HIM SUPER CAREFUL WITH MONEY?

I'M IN a relationship with guy who gambled for about 15 years. He stopped over 35 years now and goes to meetings every week. He's a good man, but he's very careful with his money – not mean, but careful. Could this be due to his addiction?

FIONA SAYS: If this man still goes to regular meetings 35 years after he stopped gambling, it's probably safe to say that he must have had a very serious problem indeed. It's also likely this was accompanied by some major debt issues too.

Given that he's been in that position before, I'd say he's showing a good deal of common sense by doing all he can to avoid it happening again. If that means being careful with money, so be it, and I'd encourage you to be supportive if you want this relationship to work.