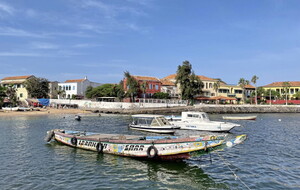 Goree Island in Senegal is worth a visit

SWITCHING off the motor of our rough and weathered wooden boat, Senegalese guide Sogui Wade invites us to listen carefully. Gliding silently through a maze of mangroves in the Saloum Delta, our attention is drawn to an unusual snapping sound, akin to embers crackling in a fire.

The strange syncopation, Sogui insists, is the sound of oysters breathing.

Clinging to exposed roots of mangroves, strings of shellfish perform a symphony that’s surprisingly soothing. Who’d have thought? But it’s one of the many new discoveries I make on a week’s holiday to Senegal.

Wedged between the emerald rainforests of the Gambia and orange desert dunes of Mauritania, this coastal country bulges into the Atlantic Ocean at the most westerly point of the African continent.

Barely known to travellers from the UK – including even the most ardent African adventurers – it’s an offbeat holiday option. Although it’s set to become one of the most affordable, easily accessible and exciting winter sun destinations, thanks to new direct flights launched by TUI earlier this month.

Connecting London Gatwick with Senegal’s capital city Dakar, in just over six-hours, weekly flights will run between November and May. Starting at around £800 for seven nights all-inclusive, prices are a fraction of equivalent packages to the Caribbean or the Indian Ocean. Hovering between 29-35C, temperatures are much higher than the Canaries, and with 11.5 hours of daylight during winter, there’s plenty of time to work on a tan. Even better, no time difference means there’s zero jet lag.

Promising sun, sea, sand and a touch of safari at jaw-droppingly low prices, packages are already largely sold out until the end of this year. Here’s the low-down on what to expect.

THE ACCOMMODATION IS SURPRISINGLY LUXURIOUS

A 75-minute drive from Dakar’s Blaise Diagne International Airport, the new 522-room RIU Baobab on Pointe Sarene is TUI’s main hotel partner, and was one of the key drivers for persuading the package tour operator to invest in this region.

Large, luxurious rooms with ocean-facing balconies (and a few suites with private pools) line the length of a golden beach, strewn with palms and thatched cabanas. A spa and modern gym are set alongside pools and a swim-up bar, where Dutch, French, British and Senegalese families bathe with flutes of Prosecco or glasses of crisp rose wine. A colossal buffet is accompanied by speciality sushi and Italian restaurants, both pre-bookable but included in the price.

A waterpark with slides and a kids entertainment attracts families, but the hotel manages to maintain a smart, upscale atmosphere.

Going on safari can be eye-wateringly expensive, excluding lower earners or families. But in Senegal, there’s an opportunity to see some of Africa’s most charismatic species in one of the country’s six national parks.

Admittedly, the best, Niokolo-Koba, is a 500km drive south. Privately-owned Bandia Reserve is a reasonable compromise – although not all animals are native to Senegal. See giraffes, elands, zebras and even rhinos on simple game drives through acacia and baobab forests, finishing at a visitor centre overlooking a lake heaving with crocs.

More interesting from a conservation perspective is the Tortoise Village in Noflaye. Run by the African Chelonian Institute NGO, the project focuses on breeding endangered sulcata tortoises, to be released into the wild. Many of the hard-shelled residents have been rescued from a pet trade fuelled by traditional beliefs these animals can cure asthma and bring good luck.

THE CULTURE WILL BLOW YOUR MIND

Daily life in Senegal is as bright, bold and colourful as the patterned kitenge fabrics hanging from craft stalls. Walking around a village market gives a sharp insight into local living. Men wearing floaty tunics and conical hats sell livestock, while women in peplum dresses and oversized designer sunglasses sit behind mountains of melting shea butter and sacks overflowing with peanuts. More affronting are medicinal stalls covered in lizard skins, pig tusks and dried monkey heads – a reminder more education on animal welfare is still needed in this part of the world.

BUT IF YOU ONLY DO ONE THING…

Visiting a former slave house might seem morbid, but a trip to the House of Slaves museum on Unesco World Heritage Site Goree island is both a poignant experience and important lesson in understanding Africa’s past.

A 20-minute ferry ride from Dakar, the pretty island is filled with artist studios, seaside restaurants and cafes. But between the mid-15th and mid-18th centuries, 20 million slaves were loaded onto ships from here and sent across the Atlantic. All passed through the Door of No Return, an opening onto an empty ocean, never to see their African homeland again. More than any textbook or TV documentary, the experience of standing in that doorway brings home the suffering of so many.

Any upset, however, is balanced by the sight of so many Senegalese people visiting the site to better understand their own history. In the dusty ochre streets outside, young drummers jamming on the jetty express not a single sentiment of anger – just joy in the present and a focus on the future ahead.

TUI (tui.co.uk) offers seven nights at the 4T+ Riu Baobab on an all-inclusive basis from £810 per person (two sharing), including flights from London Gatwick on February 27, 2023, and transfers.

Various excursions, booked separately, cost from £56 to £65 per adult.