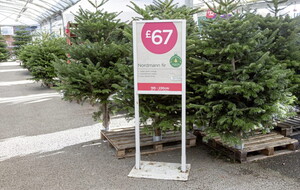 CHRISTMAS is on the way and for many of us, this means choosing a tree – the mainstay of the festive season at home. But this year more than ever, keeping costs down is a top priority.

The most popular real Christmas tree, the Nordmann fir, a non-drop variety, can cost upwards of £50 depending on size, making a large hole in an already stretched budget.

So, how can you get the best deal on a real Christmas tree?

Shop around: “It’s worth shopping around and searching for deals at supermarkets and other stores to try and find the best price,” says Reena Sewraz, money and shopping editor of Which? (which.co.uk). “In 2020, we found Aldi offered the most competitive price for a 1.5-1.75m cut tree.

“As well as the big retailers, it’s well worth checking out your local garden centre to see what’s on offer,” Sewraz adds. “Keep an eye out for deals too. For example, Ikea will be offering a £10 voucher when you buy a real Christmas tree for £25 over the Christmas period.”

Bag a smaller tree: If you need height but don’t have a lot of space for big branches at the base, consider buying a smaller tree and placing it in its stand on a table or on an upturned pot to raise it up, suggests Marcus Eyles, horticultural director at Dobbies Garden Centres (dobbies.com).

The chain has a 4-5ft promotional Nordmann fir for £19.99 and is also offering slim Nordmanns (between 6-7ft) for people with narrow spaces, for £39.99, which is less than the cost of their premium counterpart, he adds. A smaller tree means fewer decorations, which will also save you money.

Make it last: “When it comes to getting good value for money with a Christmas tree, you want it to last for the duration of the Christmas period,” says Sewraz. “There are many varieties of Christmas tree – Nordmanns and Norway spruces are the most commonly available. Nordmanns don’t drop their needles as readily as Norway spruces, so might last longer.

“To ensure your tree remains in good condition over the festive period, buy it as late as you dare – ideally the weekend before Christmas. Look for freshly delivered stock and choose one in good shape,” she adds.

“If you opt for a cut tree, pick one that has at least 30cm of clear trunk at the base. When you get it home, stand trees in a cool part of the room, well away from radiators. The secret of a long-lasting Christmas tree is to care for it properly, so it doesn’t drop its needles too quickly.”

Buy a pot-grown tree: If you are prepared to look after it, a pot-grown tree (not potted, which is effectively a tree which has been dug up and put in a pot) may be good investment, says Eyles.

Dobbies’ pot-grown blue spruce trees start from £24.99, while its equivalent pot-grown Nordmann starts at £34.99. They can be grown on in the garden or on a porch, says Eyles.

But you have to be careful not to shock pot-grown trees when moving them outside after Christmas. So don’t plant it out into the garden immediately, but put it somewhere cool to allow it to adapt to the different conditions, he advises.

Alternatively, replant it in a larger pot so the root is allowed to run, water it regularly and keep it in shade in the summer and you should be able to re-use it for Christmas next year.

Use clippings to save on decorations: If you buy a tree which needs trimming, save money by making decorations out of the clippings. Natalie Plumbridge, horticulturist at RHS Garden Wisley, suggests: “Instead of throwing away excess branches and sprigs, use them within a Christmas wreath, along with other evergreen foliage and berries from the garden.”

Spare branches can be used with other evergreen foliage to dress your fireplace, to to give a candle centrepiece the festive treatment.