Gardening: How to add rose hips to your winter displays

Think before you prune, because these red and orange seedpods provide valuable pops of colour, says Hannah Stephenson... 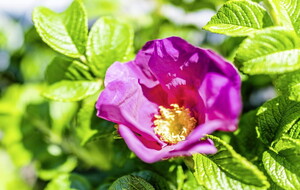 TRY to avoid deadheading the last of your roses, because their hips will provide you with rich red and burnt orange shades through winter.

The eye-catching little fruits – which emerge after your roses have done their best in summer, and are actually the seedpods of the flower – can be used to add lustre to Christmas decorations, or even feature in simple festive wreaths for your front door.

A lot of roses grown for their hips as well as their flowers are used as hedging, because many tend to be tall and wild in their growth, while ramblers and climbers produce great trusses of flowers, which will all become hips if left to their own devices. The best hips are generally produced by species (or wild) roses.

Which roses are best for hips? “Roses from the Rosa moyesii family boast some of the most attractive hips,” suggests Philip Harkness, managing director of rose breeder Harkness Roses (roses.co.uk). “They are long, orange to red in colour and shaped like un upturned flagon, beautiful sculptured curves hanging through most of the winter.

“The petals tend to have a slightly waxy texture, the flowers in early summer are single blooms of a good size. The hips are more showy than the flowers.”

Sarah Squire, chair of Squire's Garden Centres (squiresgardencentres.co.uk), adds: “In my garden the best hips are found on our sweet briar roses (Rosa rubiginosa), which are in a mixed native hedge we planted, mainly with wildlife in mind. Our climbers ‘The Simple Life' and the ‘The Generous Gardener' also have a good display – helped by the fact we cannot easily reach up to deadhead them.”

He also rates Rosa helenae, a vigorous tree-climbing late flowering rambler, with creamy white flowers followed by masses of orange hips. It looks fabulous grown over arches and along walls.

Which other roses stand out for their hips? Rosa glauca (aka Rubrifolia): “As the aka name suggests, it has foliage with a red tinge which holds interest from March to November. The flower is a small light pink delicate single bloom followed by many deep red rounded hips,” says Harkness.

Rosa ‘Morning Mist': This large shrub rose, which grows to around 6ft, produces masses of single coral-pink flowers in summer, followed by striking orange hips. It is repeat-flowering, but try not to deadhead too many of those spent blooms if you want a dazzling display of hips.

Rosa nitida: Those with a smaller space might plump for this little beauty, which can be grown in a pot and will reach barely 1m high. It produces deep rose pink flowers in summer, which turn crimson in the autumn and then you'll be treated to a display of hundreds of pearl-like red hips and fiery autumnal foliage.

Rosa canina: The egg-shaped hips of the wild dog rose are a magnet for birds and can also be cooked, producing a tart flavour. In early summer you can enjoy the white to pale pink flowers of this glorious hedgerow shrub which grows to 3m high.

Scotch roses (Rosa pimpinellifolia): Indigenous to the UK, with yellow or white blooms, these plants are smaller than many of the other hip producing shrub roses – growing up to 1.2m tall – producing hips which ripen to black.

How to get the best hips: As well as not deadheading, to get the best hips, you'll need to look after your roses during their growing season, watering regularly and feeding with a fruit and flower fertiliser at least once a month. The more flowers you have, the more hips should be produced.

Travel: Why Turkey is the perfect choice for an autumn wellness break