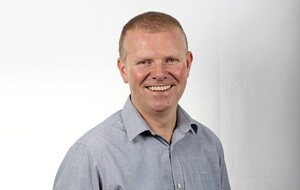 The banality of evil has long been explored in drama after is was first coined about Adolf Eichmann during his Nuremberg trial.

And it is a truth that entirely ordinary people can commit the most odious of crimes, up to and including genocide.

Inside Man sets out to explore this fruitful topic and with David Tennant and Stanley Tucci in the lead roles for this four-part series over two weeks, it promised much.

Unfortunately, it’s been a let-down.

Tucci plays Jefferson Grieff, a character as familiar as the soon to retire honest cop who can’t help getting involved in one last impossible case.

Grieff is the urbane and intellectual prisoner. Think Andy Dufresne in the Shawshank Redemption. He was also in jail for the murder of his wife.

To give Grieff a bit of additional substance, he’s paired with Dillon Kempton, an entirely loveable serial killer.

Kempton, who has a photographic memory, is Grieff’s secretary of sorts and accompanies him to all meetings to mentally record proceedings.

Grieff, in the time-honoured fashion of these characters, is sought out by investigators and journalists for his ability to solve other crimes because of the unique nature of his intellect. Think Hannibal Lecter

Grieff is beloved of the prison governor and takes appointments as he sees fit to amuse himself. He languishes on death row in a US jail while we are introduced to another unlikely killer in England.

We know he’s going to be a killer because we cut immediately to Harry Watling after Grieff enlightens us that “everyone is a murderer, you just have to meet the right person.”

Tediously emphasising the point about the ordinariness of evil, Watling is a vicar in a picture-perfect English village with a loving wife and a son.

Watling agrees after some resistance when he sees self-harm scars on Edgar’s arms.

However, it turns out that that the memory stick hides child pornography and when this is found in the vicar’s house by his son’s maths’ tutor, things take a nasty turn.

For some bizarre reason (perhaps we are yet to find out), Rev Watling takes personal responsibility, rather than point the finger at Edgar, and in a series of escalating actions, locks the tutor, Janice, in his cellar before she can tell the world.

Equally bizarrely, his wife goes along with the kidnap plan.

Meanwhile, the actions on either side of the Atlantic are linked by an English journalist who has recently befriended Janice after she rescued the young reporter from an unsavoury incident on a train and is in the US to interview Grieff.

To copper-fasten the point, we end one section with Grieff standing in his cell, his arms hanging through the bars before the screen splits and we see Janice in her own cell in the dark cellar, the bars represented by a partition wall without plasterboard.

As Rev Watling gets deeper in, he decides it’s his Christian duty to take the blame for Edgar and gets the paedophile to transfer the child pornography onto the church laptop.

The vicar seems unable to comprehend that protecting Edgar is exposing other children to abuse.

“Never go near that stuff again,” he absurdly tells Edgar.

Inside Man is a drama where contortions of reason are needed for it to work and characters are hamstrung by clever lines and witticism.

You can see the acting, imagine the cameras and almost hear the director.

It was that bad that I wouldn’t be surprised if Michael Flatley made a guest appearance next week.