Film: ‘I just thought it was too good to be true' says Zac Efron of landing The Greatest Beer Run Ever

Based on a true story, Zac Efron's character heads to the frontline in Vietnam to deliver beer to his friends in The Greatest Beer Run Ever... 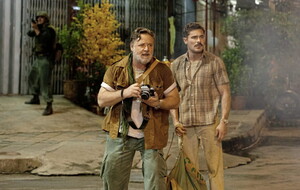 Russell Crowe and Zac Efron in The Greatest Beer Run Ever

BASED on a true story, Zac Efron's character heads to the frontline in Vietnam to deliver beer to his friends.

“He reminds me of John Travolta in Saturday Night Fever in this movie,” director Peter Farrelly says matter-of-factly.

The object of his flattering comment is of course the leading man of his latest film, Zac Efron.

The former teen heartthrob, who won a legion of fans in High School Musical, plays John ‘Chickie' Donohue in The Greatest Beer Run Ever, which documents the remarkable story of US Marine veteran Donohue, who in the late 1960s decided to help his friends serving in Vietnam, by personally delivering them a taste of home in the form of their favourite American beer.

Armed with a duffel bag full of beer, as a Merchant Marine he managed to secure a job on a ship bound for Saigon and on arrival, sets out to find his friends on the frontline to give them the brews, with the undertaking opening his eyes to the realities of war.

“First I thought it was just the craziest thing I've ever heard that somebody would bring beer into a war zone, just to show support to his friends,” says Farrelly.

“And the fact that he actually did it… it was just a no-brainer to me that I had to make it, as soon as I heard it I started looking into getting it done.”

For American star Efron, 34 – whose other roles include playing serial killer Ted Bundy in Extremely Wicked, Shockingly Evil And Vile – the fact that it was based on a true story also left him in awe.

He explains: “I remember reading the script for the first time and going there is absolutely no way that this is true. But it was and it is.

“And I also remember that it would take a special filmmaker to sort of navigate this perspective, this point of view of the civilian going through the Vietnam War in this fashion, with the due respect and the sensitive matter, the sensitive issue of war, and also the sense of humour that was necessary in the story.

“And so I was excited to work with Pete, I just thought it was too good to be true.”

Based on the book of the same name, from the real-life John ‘Chick' Donohue, which he wrote in conjunction with American reporter and columnist, JT Molloy, the film also stars big-hitters like Russell Crowe (as war photographer Arthur Coates) and Bill Murray, who makes a few appearances as a bartender called The Colonel.

Along with his brother Bobby, director Peter has become well-known in Hollywood as one half of the famous Farrelly brothers. With films like Oscar-winning Green Book, Dumb And Dumber and There's Something About Mary under his belt, working with him was a draw for Crowe.

Referencing Farrelly's Jim Carrey-fronted 2000 comedy Me, Myself and Irene, Crowe says: “At a certain point, that was the perfect movie to me. I watched it obsessively. I also like how Pete has grown as a filmmaker. I really like Green Book — the performances he got and the heart in that movie.”

Farrelly (65), says of Crowe: “Russell is a legend and I've wanted to work with him my entire career. I've probably offered him five things and he always said no, but we finally got him for one.”

The Greatest Showman star Efron reflects on taking on the character of Chickie.

“He's a really fascinating character and his journey has so many ups and downs, but it's really poignant, in a very brief period of time he experiences real life,” enthuses Efron.

“I love that arc. It was fascinating, it was fun to work on. It was very cool to experience, it came really naturally in the filming process for me, I didn't have to reach very deep, I felt for Chickie a lot. So it's a great, great journey.”

Seated next to him, Farrelly offers up his thoughts.

“It's fun to work with flawed characters,” he muses, adding: “I've told everybody this, but he reminds me of John Travolta in Saturday Night Fever in this movie.

“It's a flawed guy who's trying to be better, he does make some mistakes, but ultimately his heart is in the right place. And you can't help but root for him, and he's really good-looking!”.

The real-life Donohue, when asked about the trip he made and what he was thinking, has been quoted as saying: “Well, obviously I wasn't.

“But I felt like it was the right thing to do and I was the only person in that group who was qualified to do it.”

His journey was turned into a book, and also spawned a 12-minute documentary, made in 2015, now all culminating in Farrelly's film.

The director says: “I hope people come away realising that war sucks for everybody, for all sides, and that love, friendship and camaraderie are what life's supposed to be about.

“It's very rare that a war is worth fighting. World War II definitely was, but there are far too many wars that are ultimately pointless and hurt both sides.

“The soldiers are victims, too. The American soldiers who went to Vietnam were following orders. They were patriotic 18, 19 and 20-year-old old guys who thought they were saving the world. And as it turned out, they weren't.

“That's generally what happens with war.”

The Greatest Beer Run Ever streams on Apple TV+ from September 30.

Film: ‘I just thought it was too good to be true' says Zac Efron of landing The Greatest Beer Run Ever