Food: Tom Kerridge on tricking his son to eat veg and the ‘frightening' cost-of-living crisis

The popular TV chef chats to Lauren Taylor about making easy dinners in less time – and keeping it real for his latest cookbook... 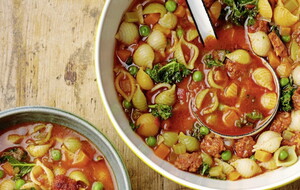 ToM KERRIDGE has the sweetest hack for getting his six-year-old to eat vegetables.

“It doesn't matter who your parents are – I'm a chef with two Michelin stars and I'm still trying to get my little man to eat cabbage,” says the dad-of-one. So he tries to “trick” his son Acey into eating his greens, by telling him it's what “a dinosaur” likes, or that “Lewis Hamilton or Ronaldo eats it”.

“I try everything to get him to eat anything new, but he's already got a preconceived idea that it tastes horrible – that's the problem with kids,” says Gloucestershire-born Kerridge, whose pub, The Hand and Flowers in Marlow, was the first gastropub to receive two Michelin stars. Thankfully, his wife Beth's ‘hide-the-veg bolognese' usually does the trick, he says.

As a busy working parent himself, 49-year-old Kerridge knows the realities of feeding a family when you have little time and energy. It's why his new book, Real Life Recipes, is written with modern life firmly in mind. For his 10th cookbook, he wanted to avoid the trappings of “aspirational, beautiful” food, instead offering something you'd actually be able to whip up quickly on a Tuesday night. “I tried to make it a little bit more connected to the reality of life right now that we're living in. Everyday ingredients in everyday life.”

For many families, that means probably not eating together as often as they'd like, and last-minute meal decisions based on whatever is languishing in the fridge – maybe with an ingredient or two picked up on your way home. “I'm probably home two evenings a week,” Kerridge admits. “Parenting guilt is something that all of us [parents] live with. It's massive, it's inevitable, you can't avoid it.”

As Acey goes into his second year at school, Kerridge hopes his simple family-friendly recipes will help parents who are getting back into the routine for their “normal lives running around and being busy and up to their eyeballs”. Think sausage traybake with honey mustard glaze and posh fish finger butties – “Dishes that people know, they're simple, they're easy to put together.” Some are a little fancier – “But not full on cheffy” – like prawn tacos with chili salsa and vegetable bhaji burgers.

Crucially, many are doable in 30 minutes or less (“The timezone most people have”), with standard supermarket ingredients.

“We'd all love to live in some provincial French market town, wander around a market stall, pick up two aubergines and a courgette and some red peppers, some freshly caught fish, and then pop to the bakery and then go to butchers – but we don't live our lives like that,” he observes. “We're super busy, under a lot of pressure, and it is always last minute running around, ‘What have we got for tea?'”

Like a lot of us, Kerridge's family do an online shop each week for routine essentials, and top it up with supermarket trips – but as food prices and the cost of living in general increases, he says meal planning for the week so “you're not just ordering things willy nilly” is essential for cost-saving, and batch cooking and freezing extra portions helps too. He says, for this book, “Trying to be a bit more pocket friendly was incredibly important”, as well as listing ingredients that weren't specialist or expensive.

Many of his new recipes are tagged as ‘low shop' – meaning you can use a lot of basics that you probably already have in your kitchen, like his ‘pantry spaghetti' or ‘fridge raid soup'. And who knew you could whip up a coffee and walnut cake from almost all store cupboard essentials?

“It's a case of using those things that are floating around, stuff you've used once or twice,” Kerridge explains. “If we say use curry powder but you've only got chilli powder, just use a bit of that – it's about trying to free up those rules… And just trying to use what's there.”

The cost-of-living crisis is “here now, and something we're going to have to deal with”, he says. And as someone who owns six restaurants, he describes food and energy price hikes and inflation rates going forward as “incredibly frightening”.

He recently shared in an interview with the Telegraph that energy prices for one of his pubs has gone from £60,000 to £420,000 a year.

“There is no price cap on the energy that comes into a butchers or an abattoirs or into a fishmonger or a big veg wholesaler, then that cost has to go into a restaurant, which also has no price cap,” he explains. “It's very nerve-wracking, seeing what's going to happen come October when the clocks go back and heating starts going on and fuel goes up again.”

And, of course, not only is the cost of going out invariably going to go up, but people will likely have less money to spend out. “Which in turn will mean a lot of issues for a lot of restaurants, bars, clubs and spaces that operate in hospitality,” he says. “It's almost the perfect storm – you can't get around it.”

Below is a recipe for you try at home:

Add the thyme, chicken stock and tinned tomatoes and bring to the boil. Reduce the heat to a simmer and cook for five minutes before adding the pasta. Stir well and simmer for 12 minutes or until the pasta is almost cooked.

Toss in the frozen peas and kale, stir well and season with salt and pepper to taste. Simmer for a few minutes until the kale is tender.

Ladle the soup into warmed bowls. Add a drizzle of extra virgin olive oil and a sprinkling of Parmesan, then serve.

TV Quickfire: Comedian Sarah Millican on how she enjoyed new series of Taskmaster