Best of bygone Britain on display at Beaulieu 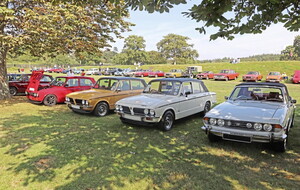 CLASSIC car and bike fans will once again flock to the grounds of England's National Motor Museum at Beaulieu in Hampshire as Simply British Classics returns on Sunday September 25.

As ever, the show will celebrate some of Brexit Island's favourite motoring marques from Aston Martin and Wolseley to Berkeley, Triumphs, Allard, Morris and Vauxhall. All cars and bikes built in Britain or by British manufacturers before the year 2000 are allowed to take part, with last year's rally seeing a huge variety of classic motors driving into the showgrounds.

Event-goers can vote for their favourite car of the show in the People's Choice Award, with the winner receiving a Beaulieu trophy and an Autoglym prize. Voting is open to all visitors until 1pm that day, with the presentation taking place at 2pm.

Anyone considering taking part in the show with their classic is encouraged to buy their tickets in advance, which will also grant them access to the Motor Museum – where the Bond in Motion: No Time To Die exhibition of James Bond vehicles is still ongoing – and the rest of the Beaulieu attractions.

All other visitors should purchase normal visitor admission tickets – both variants are available to book now at beaulieu.co.uk/events/simply-british-classics

The Simply British Classics show is just one of the rallies taking place at Beaulieu during 2022, with the annual rallying call for modern micro-car drivers, Simply Smart, due to follow in November.

Best of bygone Britain on display at Beaulieu