Leona O'Neill: We can forgive and forget here only if we are allowed to forget

Both 'sides' of our community can have a positive role in restoring the hope for the better future we were all promised when the Good Friday Agreement was signed. Alternatively, they can keep on burning to the ground all the good work that has gone before, writes Leona O'Neill... 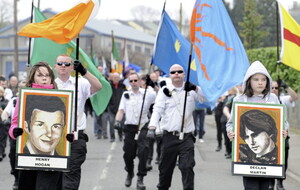 IT SEEMS that we are incapable of moving on from the hurt and hate in this place and take it in turns to crush each other's souls like it's our favourite game.

At the weekend, thousands of people thronged the streets around the Shankill to attend a parade in honour of UVF man Brian Robinson, who was killed by the army after shooting an innocent Catholic man dead in the street as he walked home.

As a Catholic, who has spent a lot of time on the Shankill Road, it saddened me to know people were once again celebrating someone who murdered another human being merely because of his religion.

Those old emotions we all lived with during the Troubles – unease, not feeling safe, wariness – came back with the news reports. Not a nice feeling.

For months the emphasis has been on IRA actions in the past: social media is awash with people condemning the singing of songs about the IRA at Feile, or volunteer commemorations. The problem here is that many of those people see commemorating their 'own' as perfectly OK, and the 'other side' as wrong. Some people simply cannot see past the end of their nose to realise the damage that all of this does.

If in 2022 we are still coming out onto the streets to honour killers, to march and clap and rub salt into the wounds of the person's victims, there is no hope for this place. Not only that, but those actions – whether you believe it to be or not – sends a message to your neighbours very clearly that you agree with killing people because of their religion, that they are lesser than you, that they deserve to die because they were Catholic or Protestant or had a certain job. It emphasises that there will also be a section of society here intent on, whether they see it that way or not, ceaselessly hurting the 'other side'.

Back in 1998 we were told that we were about to embark on a journey towards peace and eventually reconciliation. Part of that reconciliation process would obviously have to contain some manner of forgiveness. To establish forgiveness and reconciliation, human beings need to believe that there is level of remorse, that the perpetrator acknowledges that they have committed an offence, that hurt was caused.

The thing about this place is relations were ruptured because of events, unimaginable hurt was inflicted on all sides for 30 years and now, instead of trying to build bridges, we are burning them to the ground every time one side places a murderer on a pedestal as a hero.

Have we just given up on repairing fractured relationships and trying to make this place work? The last few years looks like it. Failure to deal with this issue now, regardless of how difficult it is, will only result in future hate and conflict.

Those who dig their heels in and demand we put up with this constant scrubbing of our big Northern Irish wound with a dirty Brillo pad because it is this community's right or that community's culture are not helping. Taking responsibility, owning your actions, showing remorse, saying sorry for hurting others takes courage and helps build good relations. They teach us that in primary school.

Both sides here could have a positive role in reconstructing relationships and restoring the reconciliation dream we were all promised when the Good Friday Agreement was signed. Equally both sides can have a negative role to play in burning all the good work to the ground and handing the next generation the ashes in a box with an apology at the state of it because it was our right to celebrate/commemorate/remember even when that action hurt someone else, again.

This wont happen if we are constantly commemorating and cheerleading for the IRA or UVF or whatever organisation peddled hurt and hate on any given day here.

Leona O'Neill: We can forgive and forget here only if we are allowed to forget