There are a frightening number of people here who seem to want to re-start the Troubles. The fact that a lot of them did not live through those dark days in the first place shows that we have let our young people down, writes Leona O'Neill... 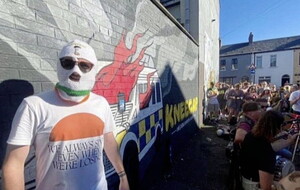 We are taught the fundamentals of empathy and equality in nursery school. We are taught to share, to take turns, to be kind, to say "sorry" if you hurt someone, that everyone is important and their feelings are legitimate, to comfort each other and be friends.

But somehow, some of us lose all of the above in the journey of life.

Maybe I care too much. Maybe it's best not to care at all, that I should take a leaf out of a lot of people's books here in Northern Ireland and stick religiously within my own very rigid beliefs, not be interested in anyone else's point of view, or experiences. I dare say not caring about anyone except yourself leads to a less stressful existence.

For example I shouldn't care that this place seems to be getting more sectarian and divided by the day. Why should I care about that?

I shouldn't' care that a Belfast rap band paint a mural on a wall depicting a riot, a police vehicle lit up by a petrol bomb. Why should I care that this mural seems to dehumanise police officers? Why should I care that children and young people will look at it, see the praise about it, and maybe believe that it's OK to attack police officers – fellow human beings, brothers, sisters, fathers and mothers, doing their job? Who cares? It's only art, it's only rap, it's only an expression of anger in youth.

Perhaps I'll not care that there were Parachute Regiment flags being sold to march-goers in the city where the same regiment gunned down 14 innocent people less than a mile away? I shouldn't care that the sale of this unofficial flag is a shameless and disgusting celebration of the murder of teenagers, young men, fathers, pensioners. Who cares? It's only a flag. What harm can it do? It's only an expression of culture.

Young people singing songs about the IRA? Who cares? Other young people putting signs up on bonfires about killing Catholics. Who cares? Republicans and loyalists celebrating and idolising murderers as heroes. Who cares, really? People should be allowed to remember their dead, even if the act retraumatises the victims and those left behind. What difference does it make? This is Northern Ireland. This is how we do things, how we have always done things, and it's worked well for us up to now.

Look at us, we're doing great. Thriving in fact. Except we're not. Our young people are being fed the notion that sectarian hatred, despising your neighbour or a police officer or someone from a different religion to you, is right and just.

We are handing down the baggage we accumulated and inherited from 30 years of Troubles here to the next generation. We are wrapping it up in colourful murals and vibrant songs and solid commemoration stones and silky flags and we're telling them it's a thing of beauty to be cherished, when in fact it will destroy them from the inside too.

There are a frightening number of people here in this place who wish to bring us back to times when we hated each other enough to kill. A lot of those people did not live through those days and have no concept of how effortlessly we could tip back into the abyss.