As Amsterdam-based crime drama Van Der Valk returns to ITV for series two, we found out more from star Marc Warren about what's to come... 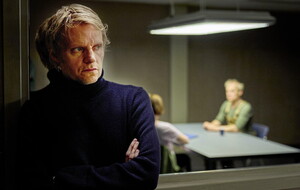 WHERE DO WE FIND PIET VAN DER VALK THIS SERIES?

Well, he's single, but his opening scene sees him suddenly getting a bit of love in his life.

He's getting hit on by a couple of women, and then gets rescued by another woman. This turns out to be a character, Lena, that will run throughout the next three episodes, and possibly more.

I think he's quite closed, so he's a bit impenetrable. Lucienne [played by Maimie McCoy] is always trying to open him up. He has great respect for Lucienne. I think he regards her as his only friend, really.

HE ALSO BECOMES A MENTOR TO CLOOVERS, PLAYED BY ELLIOT BARNES-WORRELL...

At the end of the last series, of course, Cloovers saved my life. So, at the start of this series, we have to see what the repercussions are for him. I was cold to him in the first series, so there's definitely a warming up in this series. I keep an eye on him.

Elliot and I have a couple of really lovely scenes – when you're doing something that's more procedural like a detective show, to then do something a bit more human and emotional is really lovely.

That's also what I got from the relationship with Lena – it allows me to show different sides as well.

REBOOTING A CLASSIC TV PROGRAMME BRINGS A LOT OF PRESSURE. HAS THAT EASED?

And then, as we all know with work, before long, you're fully engaged with it 24/7 and then you don't think about anything else. So my great aspirations to let it go have not really worked…

HOW WAS FILMING IN AMSTERDAM DURING THE PANDEMIC?

We all came straight from lockdown in the UK, with all the protocol you have to go through. And then we had to do five days' isolation at a hotel, where we couldn't see each other. And when we came out of that, we all met like long-lost friends.

I think we were all quite fragile, really, as everybody has been when they've been through that much isolation. I certainly was, and we all helped each other through it. But one of the things that was striking is how quickly you got back in the swing of it.

You know, after all we've been through in lockdown, I think the adjustment period was about 15 minutes.

DID ANYTHING CRAZY HAPPEN ON SET?

In the last episode, Maimie and I had to drive through Dam Square at its most packed in the Cherokee, both wearing bulletproof vests – I don't think we had our guns on us, but we had the flashing lights on.

Somebody had not told the local police that we were doing that, and we got pulled over. I suddenly thought "If we've got guns on us as well, we are going to be in a lot of trouble". You just leave it to the assistant directors to deal with that.

YOU'RE KNOWN FOR PLAYING BAD GUYS, IS THIS A NICE CHANGE?

It's much more minimal – I tended to play quite larger-than-life characters who were a bit flash, and this is a very different proposition. I noticed the longer I do this, I seem to get moodier. I could just feel that.