Ask Fiona: My friend's family is at breaking point 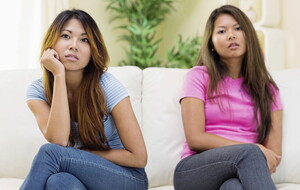 I AM writing for advice for a friend, who is in her 70s. Her son-in-law died by suicide earlier this year, which was such a tragedy and came as a big shock to everyone.

His marriage was good; they adored each other and had two daughters aged 12 and 14. He had recently moved internally in his company, but it became apparent he hated the new role. However, it seems he was tied and couldn't move again, and the next we heard he died from suicide. That is the background.

For reasons I don't understand, the family had to move out of the company house, so have moved in with my friend at her two-bed bungalow. The girls are in total shock and the 14-year-old is so traumatised, she took an overdose.

They clearly need someone to talk to but their doctor was no help, and when they contacted a local charity all they could offer was three sessions, each one two weeks apart. The girls have no friends in the area and the whole family is at breaking point. Can you help please?

FIONA SAYS: I am not surprised the family is struggling. Bereavement following the suicide of a loved one can be thought of as grief with the volume turned up to full. All the feelings of loss, anger, guilt, and confusion are somehow amplified, making it that much harder to cope.

For adults, these emotions are very challenging, and for children it can be so much worse. They will almost certainly lack the maturity to handle such intense feelings, so it is vital they get the help they need as quickly as possible.

I am surprised by your comment that their doctor was not more helpful. I know NHS counselling services are stretched and many GPs are struggling to operate in the current Covid surge. However, where children are involved, I would have expected more to be done.

I suggest you advise your friend to get her daughter to revisit the doctor (or another in the practice) and discuss what can be done. Meanwhile, the family can explore other sources of help.

You mention that the family has secured some help through a local charity, so I hope I am not duplicating what they may already know. The mother should, in the first instance, contact Cruse (cruse.org.uk; readers in Scotland can contact crusescotland.org.uk), which provides emotional and practical support for people who are grieving.

This charity also operates Hope Again (hopeagain.org.uk), a website aimed at helping children and young people. It's a safe place where they can learn from other young people about coping with grief, and hopefully feel less alone.

Another source of help is Child Bereavement UK (childbereavementuk.org). This charity offers free, confidential bereavement support for children, young people and their families, by telephone, video or instant messaging. It also has several branches around the UK where face-to-face help is available.

Finally, they could also contact Mind (mind.org.uk) for lots of useful information and potentially finding other sources of help available in their local area.

I FANCY MY SISTER'S BOYFRIEND

MY sister is going out with a guy we've both known since we were at school. I have always fancied him, and my sister knew this when she started seeing him. At the time, I had been going out with my current boyfriend, so wasn't able to catch him for myself.

I am not happy with my boyfriend, who says he loves me but I have no feelings for him. All we seem to do is go through the motions of going out with each other, but there's no real spark. Not like I have for my sister's boyfriend, who I can't stop thinking about.

My relationship is going nowhere, and it's clear that not all is well with their relationship either. They don't have a lot in common and seem to disagree about everything. They have regular arguments, some of which have been very volatile, and sometimes it seems she actually goads him just to start an argument. Then, if I take his side, she gets jealous and quickly makes up to him, but not before she's had a real go at me.

I don't know what's going on with them but it's clear they aren't happy. Should I tell him how I feel?

FIONA SAYS: Rather than wreck their relationship and upset your sister, perhaps you should instead concentrate on sorting out your own unhappy situation. If you're certain you don't love your boyfriend, and it's going nowhere, what is keeping you together?

If it's just habit, then it's unfair on him, so better to end it now and leave you both free to look for love elsewhere.

Which doesn't mean immediately going after your sister's boyfriend!

Can you be certain they are unhappy? Some couples thrive on the differences between them. So perhaps you're right, you really don't know what's going on with them. Given this, it would be dangerous to assume they are miserable and about to break up.

For the moment, I suggest you say and do nothing. If your sister knows how you feel, it's possible that some sort of sisterly rivalry is making her hang onto this guy for longer than she might otherwise.

Just step back and see what happens: don't get involved in their arguments and don't express any opinion, even if you're asked. In time, if their relationship does eventually fail, that's when you'll be free to let him know how you feel. As long as they are together though, you should stay quiet – however much you might fancy this man. It really isn't worth saying anything now – especially as you've no idea how he feels about you.

WHY HAS HE GHOSTED ME?

I'VE BEEN seeing a man for much of this year, and we have been spending a lot of time together. That is, until he suddenly cut off all contact with me, for no reason that I can tell.

I have tried to phone or video call him, but he just doesn't answer or hangs up when he sees it's me. He has also stopped answering my emails and texts, but I will keep on trying until I hear from him.

I know he's not dead or anything as I saw him drive past me yesterday. It's not like we are teenagers, we have both been divorced before and are in our 40s. Why has he cut me off like this?

FIONA SAYS: I wonder how well you really knew this man. For example, are you certain he was divorced? Is it possible he is in fact married and has been found out?

Alternatively, there are some people who cannot cope with the idea of commitment – and if your relationship was getting serious, this may have scared him away. Whatever the reason, I see little point in chasing him any further. It really hurts to be ghosted. But he's made it clear he wants no further contact, and further attempts to reach him will simply prolong the pain for you.

If you still feel the need for some sort of explanation or closure, I suggest you write to him. Explain he has hurt your feelings and ask why he has behaved like this. Be calm and reasonable and show him how grown-ups are supposed to behave, but then move on.

Please don't hold your breath waiting for a reply though, as I suspect he's either too ashamed, embarrassed, or guilty to say anything more to you.

SHOULD I LET Y 10-YEAR-OLD GO OUT ALONE?

MY 10-year-old son wants to go out and play with his friends in the park, but doesn't want me with him. I can understand his need for a bit of independence but am worried about letting him out on his own, and feel I should be there too.

However, he says that none of his friends have their mums hanging around and he would be embarrassed if I went. At what age is a child legally allowed to play outside on their own?

FIONA SAYS: To my knowledge, no legal definition exists that covers this. It's a judgement call, and deciding at what point your child is old enough to go out with their friends alone is never easy. There can be a fine line between being too careless with a child's safety, or being over-protective, and the decision must be based on so many factors.

For a start, is your son sensible? Is he aware of the dangers of speaking to strangers? What is the area like? Will he abide by any boundaries you set? If you do let him go, make sure he knows what he can and cannot do, and what time you expect him to be home.

Do you know who the other children are? Have you spoken to their parents to see if it's actually true they are allowed to go off together? It could be a whole group of children have planned this together and all the other parents are worried too. I'd suggest you talk to them – maybe a parental rota of some kind, taking it in turns to be close by.

At age 10, in a very short while he'll be making his own way to secondary school, and there's a good chance he'll want to do that independently. Finally, if he has one, consider letting him take a mobile phone too, though remind him to keep it out of sight unless he absolutely needs to use it.