Travel: How a Marvel-themed attraction at Disneyland Paris is expanding the French resort's superpowers 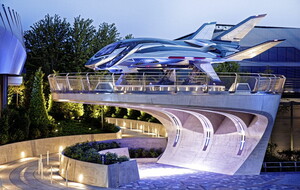 The Quinjet at Avengers Campus at Disneyland Paris

SELF-DELUSION is my superpower. Since childhood, I have diligently tended dreams of swooping gracefully between skyscrapers, clad in skin-tight red and blue Spandex like Peter Parker.

The fantasy is real this morning as I furiously flail limbs at a giant video screen, magically shooting webs from my wrists at malfunctioning arachnid robots in the newly-opened Avengers Campus in Disneyland Paris.

My spider senses should be tingling. Instead, lactic acid burns unforgivingly in my upper arms and sweat slakes my furrowed brow. With great power comes great exhaustion.

Part video game and part interactive dark ride, Spider-Man W.E.B Adventure is a centrepiece of the Marvel-themed expansion to Walt Disney Studios Park, which exists outside of the Marvel Cinematic Universe timeline.

Our four-strong team is captained by six-and-a-half-year-old Fred (the half is frightfully important at that age), whose chosen armour is a reversible sequin Spider-Man T-shirt.

We amass a respectable 803,100 points, agonisingly shy of 10th place on the daily scoreboard, by focusing on malfunctioning gold Spider-Bots (worth 6,000 points apiece) and yellow levers and buttons that activate on-screen effects, including an array of wall-mounted lasers to scythe through the wings of a hijacked Quinjet.

A full-scale replica of the Avenger's turbine fan-powered aircraft sits atop a cantilevered landing platform adjacent to the land's other major attraction – the Avengers Assemble: Flight Force high-speed roller-coaster.

With a 120cm height requirement, this gleaming reinvention of Rock ‘n' Roller Coaster Avec Aerosmith – which closed in September 2019 – retains a launch acceleration of zero to 57 mph in less than three seconds, and a track layout with two dizzying inversions and a corkscrew.

The bilingual preshow features the first Avenger audio-animatronic figure in a Disney park – a realistic Iron Man with 33 fluid movements – and footage of Brie Larson as Captain Marvel.

Projected scenes of the two heroes neutralising missiles wrap around the rollercoaster as it careens through darkness. The addition of a twinkling starry firmament to envelop the ride, replicating a design flourish of Guardians Of The Galaxy: Cosmic Rewind in Florida, would deepen the galactic immersion.

In soothing Irish tones, F.R.I.D.A.Y. welcomes recruits to the land and audibly warns of security threats.

Energised by my gung-ho web-slinging, I recharge in PYM Kitchen, named after physicist Doctor Hank Pym, who developed the Ant-Man programme and pioneered the science of expanding and shrinking matter.

Nearby, a Stark Factory quick service restaurant pays tribute to Thor with a signature caramel and milk chocolate dessert (The Thunder Cake!) in a prop-laden dining room dominated by a full-scale Hulkbuster, built by Tony Stark to counter Bruce Banner's rampaging alter-ego.

A striking Gateway Portal close to the land's entrance draws orderly queues for a photo opportunity with Ant-Man, the Wasp and (occasionally) Groot. This ‘heroic encounter' mimics character meet and greets in the rest of the resort.

The chosen hero banters one-on-one with a recruit and adopts iconic poses before 27 cameras concealed in the antechamber's walls create the first dynamic “freeze frame” video sequence in a Disney Park, available to download via PhotoPass.

Designated opportunities to interact with Marvel icons bookmark the organic and immersive storytelling. Heroes materialise without fanfare throughout the day and playfully ad-lib with awestruck guests.

The polished four-wheeler is exclusive to Paris and sustainably powered by Vibranium mined in Black Panther's landlocked homeland of Wakanda.

The trio lead a boisterous 12-minute session to train the next generation to wield spears with snarling intent. The same performance space opposite Stark Factory hosts lovebirds Star-Lord and Gamora for a humorous dance-along to Redbone's rock anthem Come And Get Your Love and ABC by The Jackson 5.

With so much activity and character interaction at ground level, Disney's creative wizards, known as Imagineers, glance to rooftops as split-level stages for breathlessly choreographed stunt shows.

Taskmaster and masked hench-thugs attempt to steal a canister of Vibranium and meet fierce resistance from Black Widow and Black Panther, replete with bilingual dialogue and well-timed pyrotechnics. Spider-Man also demonstrates his gymnastic excellence throughout the day.

Several hours can comfortably pass in the campus savouring attractions, shows and dining options. For overnight stays, Disney's Hotel New York – The Art Of Marvel is a superpowered four-star oasis situated a Thor hammer's throw from the parks.

Three life-size Iron Man suits in the grandiose lobby tease one of the largest publicly viewable collections of Marvel art in the world, including backlit comic panels, storyboards, original sketches and 50 pieces exclusive to Paris.

Hotel guests can pre-book a heroic encounter with a member of the Marvel fold in the ground-floor Super Hero Station (Black Widow launched a charm offensive during my post-breakfast visit). Eight themed selfie spots include Peter Parker's upside-down bedroom that creates the illusion of hanging from the ceiling.

As I crouch beneath a wooden bunk bed and desk littered with teenage ephemera, adopting a web-slinging pose I have been practising since boyhood, I'm reminded that in the Marvel multiverse, anything is possible.

Even an athletically challenged, late-fortysomething man-child incarnation of Spider-Man. Self-deception is bliss.