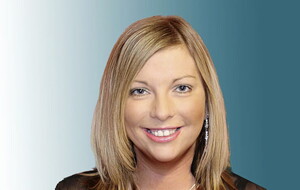 So, the countdown has begun.

Preparations are under way, plans have been drawn up and my fingers and toes are firmly crossed because the 2023 Eurovision Song Contest is coming to the UK and I plan to be there.

Let me tell you all a little story.

It starts in 1987 with the first man I ever truly fell in love with and his name was Mr Johnny Logan.

I was just 10-years-old and the Eurovision Song Contest was a big night in the McCrory household.

There I was, snuggled up on the floor, when an angel in white appeared before me.

The announcer introduced him as Johnny Logan, who was representing Ireland, in a trendy white suit and it just took one note from him for me to form a life-long crush.

With his perfect hair and deep dark eyes, his soft voice belted out `Hold Me Now' and that was it, I was a goner.

Not only did I fall madly in love with Johnny Logan that night but also Eurovision.

I was allowed to stay up late for the results and I remember going to bed feeling euphoric because we had won and it was all thanks to my Johnny.

Of course, Mr Logan had first won the Eurovision Song Contest in 1980 with `What's Another Year?' of which I have no memory though I have watched the TV footage online video many times.

He then went on to win the contest again in 1992, as composer of Linda Martin's winning entry `Why Me?'.

Of course, those glory days of the Eurovision Song Contest are well over and while the event, in recent years, has fallen well below par for me, I remain a fan.

And now, I am making plans to try and get to the contest in May after it was decided the 2023 event would be staged in the UK instead of the winner's homeland, Ukraine, due to the ongoing conflict.

But I know it won't be an easy task.

So far, all we know is that it will be in a UK city and it will take place in May.

I've no idea of location or when the tickets will be released but let me tell you, I am prepared to fly, sail, walk, run, canoe, zipwire or parachute there in a bid to be present for the final - and I won't be alone.

We each plan to fight to four tickets, transport and accommodation in a bid to be there together to experience all the glittering glamour.

Having already signed up for the official Eurovision newsletter and its updates, all I can do now is wait.

In the meantime Johnny, any chance you could put in a word for me?

George of the Jungle star Brendan Fraser is set to be seen in his first leading role in a decade.

The 52-year-old, who is best known for The Mummy franchise of films, has been transformed into a 600 pound man for The Whale.

The film sees Fraser play a man 'living with obesity' who is 'struggling to reconnect with his 17-year-old daughter'.

According to reports, the actor wore prosthetics in order to achieve the look.

Discussing the role, Fraser said: "This is certainly far removed from anything I've ever done but not to be coy…I do know it's going to make a lasting impression".

If you didn't get a chance to watch the brilliant first series of Only Murders in the Building do it now because the second season has just appeared on Disney+.

Starring Steven Martin, Martin Short and Selena Gomez, the show tells of the story of three strangers who share an obsession with a true crime podcast.

After a suspicious death in their affluent Upper West Side apartment building, the Arconia, the three neighbours decide to start their own podcast about their investigation into the death.

I was obsessed with the first series of this show and now a second season has arrived and guess what - there's another murder. The three wonderful neighbours find themselves suspects in the gruesome death of Arconia board president, Bunny Folger.

Now, the three sleuths must work together to find the truth in order to exonerate themselves.

So, there's just one question - who killed Bunny?

The winners of the Dog Park competition are Louise Speirs, from Magherafelt, Orla Breen, from Downpatrick, and Vanessa Forsythe, from Moneymore

The winners of the A Memory for Murder competition are Sam Humphrey, from Derry, Diane Hill, from Coleraine, and Gabrielle McAleer, from Omagh