This week, Lucy Stock from Gentle Dental Care explores the weird and wonderful world of nanotechnology and how it's advancing dental treatments... 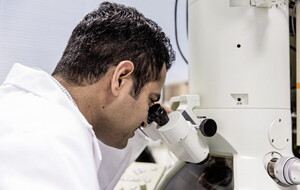 IT APPEARS that dentistry's biggest advancements may come in the form of the smallest of small packages. Nanodentistry is a branch of nanomedicine and it reeks of science-fiction. Talk of nanobots being used to deliver medicines into our bodies seems fantastical.

The Greeks coined the word 'nano' which means dwarf. When there's talk about nanotechnology, it means a thing that causes an effect due to the tiniest of particles.

Currently, nanofillers are already used in white filling materials to make them stronger and more natural looking. Some dental implants are coated with nanoscale substances, like hydroxyapatite, which makes them join to the bone better and reduces the chance of infection setting in. To you, the patient, it means that you get faster and more predictable implant treatment.

Science visionaries hope to create nanobots – robots measuring a micron in size. These nanorobots would be used to deliver anaesthetic directly to the exact tooth that the dentist needed to work on so that only a single tooth would be numbed up.

The nanobots would move through the gum, travel along the tiny dentinal tubes that make up a tooth, and be deposited into the inner nerve chamber. Then, when the dental procedure was complete, the dentist could signal to the bot to stop working – et voila, the tooth would have its original feeling restored. Mind-boggling, really.

At the moment, fast braces are considered to be a treatment that moves teeth within six-months. When nanotechnology arrives on the orthodontic scene, scientists envisage that nanobots may be deployed directly to the bone that intimately surrounds a tooth with the concept of changing the bone rapidly and painlessly. They have even speculated that teeth could be moved within minutes to hours. Even as I write this, it seems otherworldly.

They also believe that the lifespan of teeth could be elongated massively with nanotechnology. One idea is that the layers of diseased enamel would be replaced with sapphire and diamond. These materials have a hardness of 20-100 times that of enamel, which sounds much better, but teeth have an inbuilt 'give' in them so that our bones, jaw joints and skull can flex.

As with all advances, there are potential known and unknown side-effects and with nanomedicine and dentistry, they will become apparent in time.

Hate aubergines? 5 dishes to change your mind now they're in season