Geordie Shore's Vicky Pattison on new documentary My Dad, Alcohol And Me

Ahead of her new documentary Vicky Pattison: My Dad, Alcohol And Me airing on Channel 4, the Geordie Shore star tells Rachael Davis about her father's alcoholism and her own fears... 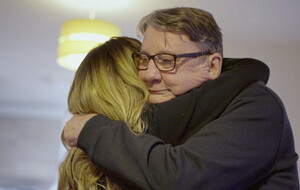 Vicky and her dad, John

GEORDIE Shore star Vicky Pattison's father is an alcoholic. It took her until the age of 28 to say the words out loud and to come to terms with what her dad's illness and relationship with alcohol might mean for her.

"My childhood is peppered with moments that I thought were normal, that as an adult I've discovered weren't," Pattison (34) says.

"I thought houses were loud and noisy and sometimes quite scary – and a lot of houses aren't.

"If you'd asked me at eight or nine-years-old if I was ever going to have a drink, I would have said no. I would have said, 'There's no way I'm ending up like my dad'. And I hate that that was even something that was in my mind that young."

Pattison is now around the same age as her dad John was when his addiction took hold, and she's terrified of going down the same path. She freely admits that she loves a drink, but sometimes doesn't know when to stop.

Here enters her biggest fear: What if there's a genetic component to alcoholism which she can't avoid?

In a touching and emotional Channel 4 documentary, Vicky Pattison: My Dad, Alcohol And Me, the TV personality explores the medical and psychological sides to alcoholism, to find out how genes and behaviour can lead to a predisposition to addiction and to learn about how best to support her dad.

"My biggest fear was that I'd find out something about me or my dad that I didn't like. Or I find out that, 'Well, maybe you are actually just going to be an alcoholic because your dad is, and you can go on all the fitness retreats you want and you can do all the Dry Januarys you like but you're going to hurt your kids'," says Pattison, who confesses in the documentary that she's scared to have kids in case she ends up like her dad.

"That would've been pretty much the worst."

Pattison made her name as a party girl on Geordie Shore in her mid-20s – a reality show which, from its first series in 2011, became infamous for its bold and brash stars and rowdy, boozy nights out.

While she admits there are parts of the show she doesn't remember filming because she was drunk, and that the show probably perpetuated the drinking culture she isn't proud of, Pattison maintains Geordie Shore is "absolutely not" the reason why she has a complicated relationship with alcohol.

"I'm a person who completely has always lived life to extremes," she says.

"Obviously I have an addictive personality, we've seen that my dad also shares those qualities."

"I am a people pleaser and I want to be what everyone wants me to be," she adds, describing how hard it has been to shake 'that version of Vicky from Geordie Shore'.

"If I am in a big social situation, like a big wedding or a massive event or a party, and someone's like, 'Oh, let's do shots! Let's do this!', it's very hard for me to say, 'Oh, no, I'm someone different now.'

"Because there is still a part of me that is that person."

Now, Pattison is concerned about the damage that her partying ways have done to her body, and fears it is a foregone conclusion that she is destined to be an alcoholic.

To understand her risk level, Pattison undergoes medical screening to find out if her lifestyle has done irreparable damage and to assess her psychological approach to alcohol and how similar this is to her dad's, confronting some uncomfortable truths about her own relationship with alcohol and about her dad's health.

In the hour-long documentary, viewers see how John often downplays the amount he's been drinking and goes through peaks and troughs of recovery.

In a particularly heartbreaking segment, John suffers a relapse after a period of sobriety. Pattison explains how he drank "constantly, consistently" for two weeks at Christmas – a high-risk time for addicts – which breaks her heart.

She's desperate to find a way to speak to her dad honestly about accessing the help he needs, and about how much his addiction hurts her – and this means a dose of tough love.

"We all need a bit of tough love," she says.

"It's so hard to be that person to someone you love, because you do just want to be the best daughter to them, the best sibling, the best whatever.

"But actually, sometimes being the best daughter or being the best father is delivering some painful home truths. I think we both had to do it for each other throughout the documentary and we're closer for it.

"I know there's going to be moments where he loses his battle with his addiction. It's not linear, this disease, by any stretch of the imagination. I have a better understanding of it now, I'm really mindful. So our relationship's better than it's ever been."

A pivotal moment in the documentary, when Pattison realises that she needs to "stop enabling him and placating his behaviour", is when she meets two women who've lost their dads to alcoholism.

"I would be the first to admit, I'm really ignorant. I've buried my head in the sand with my issues with alcohol and my dad, just hoping naively that it would get better," she says.

"But I felt like they were the first people I'd really met that I spoke honestly about it with, they understood. They obviously don't have the luxury of being able to tell their dads things anymore because they both lost them, but it made me realise that actually I am in a really fortunate position to still be able to say all those things to my dad, rather than having to talk to his gravestone."

Thankfully, it isn't too late for Pattison to have those difficult conversations with her dad – conversations that are played out during the documentary.

It's also not too late for her to change her relationship with alcohol, to focus more on moderation and to stop herself from getting drunk and becoming someone she admits she doesn't like.

"More than anything, I felt desperately grateful that it wasn't too late for mine and my dad's relationship and to say all the things I wanted to say," she says.

"There's plenty of times we could have lost my dad, so plenty of moments where I could have been in the same position as those ladies.

"I just felt really grateful that I wasn't."

:: Vicky Pattison: My Dad, Alcohol And Me will air on Tuesday August 2 on Channel 4 and All 4.