Great British Bake Off judge Paul Hollywood talks to Prudence Wade about his baking mistakes, getting used to early starts, and being a perfectionist... PAUL HOLLYWOOD didn’t set out to become a baker. Yes, his father was a baker, but he initially joined the industry through necessity.

“The 80s were difficult for everybody, everyone was on the dole. So you needed a trade to get some money – it was hard, being young. Getting a trade was always a bonus, whether you were a plumber, a bricky or whatever, and I ended up being a baker.

“It was a skill I had to learn, but I did pick it up fairly quickly” – and he knows how lucky he is to have fallen in love with the art of baking. “Any person who does a job they love – it’s not like work. Getting out of bed in the morning was difficult, but you get used to it.”

Sometimes it’s easy to forget Hollywood – best known as the steely-eyed judge on much-loved show The Great British Bake Off – built a whole career as a professional baker before going on the telly. He’s well-acquainted with those brutal 2am starts (his secret was to never snooze his alarm: “Anyone that snoozes in my industry ended up getting sacked for being late”), later becoming head baker at the Dorchester hotel, and supplying Harrods and Waitrose with his bakes.

Now, he’s arguably the most famous baker in the country, with contestants desperate for one of his famed Hollywood handshakes. But that doesn’t mean he hasn’t made mistakes. In fact, that’s how he became the baker he is today.

“I’ve screwed up in the past. I think when I was starting, I missed something like yeast, which is really critical,” he remembers.

“Having to put all the dough back in the mixer, diluting the yeast and putting it back in the dough – I’ve done that before. I’ve forgotten rising agents in Genoise [sponges], baking them and they’re flat and wondering what’s going wrong. And overwhipping meringue.

“It comes to you like a bolt of lightning, that it’s all about consistency. It’s about being consistent in your work, and consistent with the products that are coming out. It’s all good and well being good on one day, but you have to be good every day.”

And while Hollywood recognises the contestants on Bake Off are “amateurs not professionals”, he still expects a high standard from them. “They signed up to be judged, and judging they will get. It’s probably the first time in their lives they have been judged. If a friend made you a cake – good or not – you’d say it was good, because you don’t want to upset them. They’ve taken the time, they’ve done it for you, and it’s a very personal thing.

“But if you’re doing it for a judge for the first time, you’re giving it to a professional, and then you get criticised. It’s a good thing, because you learn not to make that mistake again, and your baking gets better. It’s always constructive criticism – it’s never destructive.”

Hollywood wrote his latest cookbook, Bake, while in the Bake Off bubble in 2021 – and he couldn’t have chosen a better environment. “It gave me the drive, because it was all on tap – some of the things I was eating at the time, I was thinking I could better that, or do something like that.”

Some of the bakes he sees “pique his interest”, he says. “I’m a professional baker – it’s my job, it’s my life. But at the same time, you see the bakers bring in things like bao buns, or they’ll bring in a strange [flavour]. Matcha – I’ve never been particularly fond of – I tried matcha, I don’t like matcha. I don’t think I would have used it myself… Sometimes I’ll pick up something and go, I quite like that flavour. I might try that when I get home.

“But nothing really surprises me 13 years down the line, it would take a lot to surprise me. [A bake] might remind me of something I haven’t made for a long time, [and I’d think] ‘I’m going to make crumpets when I go back’.”

So is the harsh-but-fair TV judge the same as the Paul Hollywood at home?

“At home I’m a bit more chilled,” Hollywood muses – but he’s still very much a perfectionist.

“There are certain things I like, I do have a routine. I make bread all the time for home, and I always make toast for my chucky egg in the morning – and the egg has to be done at five minutes and 13 seconds. Not 12, not 14 – 13. I’m like that, I don’t like change too much – I think it’s just the way I am.”

When we speak, Hollywood is sitting in the sunshine of his Kent garden, waiting for the call from producers telling him when filming for the new season of Bake Off would start. In the meantime, he’s sticking to his routine – and regularly baking helps him switch off.

“I do relax when I’m baking, when I’ve got a lump of dough in my hand, or if I’ve got a cake in the oven, I’ll watch it rise,” says Hollywood.

“I relax, because my mind is off anything else. I’m just concentrating on what I’m doing – which is what I expect the bakers to do in the tent as well.”

Bake: My Best Ever Recipes For The Classics by Paul Hollywood is published by Bloomsbury Publishing, priced £26. Photography by Haarala Hamilton. Available now. 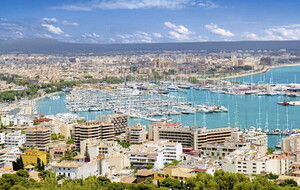