Gail Bell asks experts and people in the public eye what keeps them going. This week: Belfast comedian Jake O'Kane 1. Up and at it – what is your morning routine?

I meditate for 20 minutes... (laughs) Are you wise? I'm only joking. I have two children under 10, so meditating is not even a possibility. I'm up at 7.30am to help get them ready for school which is quite a task for an old man (55) like me. Then I'm off to work – I own a small business, an off-licence.

2. What might you eat in a typical working day for...

Breakfast? I have had the same breakfast for the last five years which has been dictated by my coeliac diagnosis, so it is a big bowl of gluten-free porridge and it never changes. Thankfully, the range of gluten-free foods available today is much better than years ago when my cousin was diagnosed with the same thing. I don't know how she survived.

Lunch? Lunch is a sandwich – gluten-free brown bread and something like ham and cheese. I have very plain tastes, so that works for me. Sometimes I'll break out and have gluten-free chocolate rice cakes, which are my downfall.

Evening meal? Whatever my good wife cooks for me – I am the cleaner and she is the cook. I usually have something embarrassingly plain like chicken, chips and beans.

3. Is nutrition important to you?

Since being diagnosed coeliac, nutrition has had to become important to me and I have to be careful about what I eat. I lose out on many minerals found in food that's now off limits, so I have to balance things out with supplements.

4. Are you a calorie counter?

No, dieting is one big con.

This I remember well even though it was about 20 years ago when we were in Tampa, Florida. It was the best meal of my life and it was dished up in an old-style rib house that we just happened upon. The ribs were infused with herbs and slow-cooked for about six months – the whole experience was amazing and is one of those serendipitous occasions that always account for the best moments in life.

6. Do you have a guilty pleasure?

Gluten-free biscuits and crisps – and the aforementioned chocolate rice cakes.

Being a power-lifter in a former life, I was always pursuing the opposite of a diet – eating to put on weight. At 14, I stumbled into a gym and found I had a natural aptitude – the right physiology and temperament – to lift weights. I was the junior champion at one stage and, at my heaviest, I weighed about 16-and-a-half stone.

8. Do you take health supplements?

Completely tee-total. I run an off licence so it's a bit like a sweetie shop owner who doesn't eat sweets.

Fry-up. I tried fruit once but wasn't impressed.

Always the stairs due to the fact someone could easily break wind in a lift and it's such a confined space. That is never good.

12. Do you have a daily exercise regime?

I never go near a gym now but I do like walking a few times a week. I live beside Cave Hill so it's always nice to walk there.

Make small, incremental changes that will last instead of embarking on some something dramatic that won't. Go walking in the fresh air and forget about the gym. It's easier to get out of a maximum security prison than a gym membership.

15. Do you have a memory from school sport / PE days you would rather forget?

No bad memories. I was always pretty good at sport and was always well up the picking order when it came to getting chosen for any team.

16. Did you ever have a health epiphany which made you change your lifestyle?

My coeliac diagnosis came close to an epiphany, as well as breaking my spine while lifting weights. With the former, I was just relieved to know what was making me ill; I had dropped down to about 10 stone and thought I was dying. I was a ridiculous weight and at one stage was lighter than my wife. When I knew what it was, I made the necessary dietary changes. I still miss the occasional Belfast bap or Kentucky Fried Chicken, but it's a small price to pay.

The only time I ever broke my gluten-free diet was when a pub, which shall remain nameless, served me chips cooked in the wrong oil. It was on my way to a gig and the warm-up man had to stand at the side of the stage with a sick bucket. Luckily, I didn't need it.

The other life-changing experience came after I broke my spine and needed two operations. That ended my power-lifting career, but it was a blessing in disguise. I see former powerlifters now, the same age as me, who are on crutches or in wheelchairs.

17. Best health advice you were ever given and would pass on to others?

My old trainer at the gym used to say that success is not about ability, but stickability. He said that at the time I was going mad in the gym and then disappearing for long periods.

18. Who would you try to emulate in terms of fitness / attitude to life?

No-one; just be yourself.

19. What time do you get to bed normally and do you think you get enough sleep?

Having grown up working in the licensed trade and then on the comedy circuit, there were always late nights so, no, I never get enough sleep. It definitely impacts on your cognitive thinking, but I'm not very bright anyway, so it doesn't matter.

20. Would you say you have a healthy attitude towards your own mortality?

I have dodged death a few times already and now I am closer to the end than the beginning. I think we all have an unhealthy attitude towards death, but it's part of life. Once you accept that fact, you are free to get on with enjoying your time here more intensely. 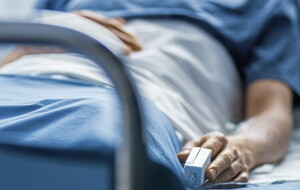