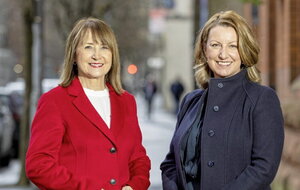 MORE than half of businesses in the north believe the Northern Ireland Protocol is supporting their growth, according to a new survey.

The new research carried out by the Northern Ireland Chamber and Invest NI showed while a considerable number of firms are experiencing some concerns and challenges around the protocol, most believe the positives outweigh the negatives.

Just over one-in-two (54 per cent) said the protocol is either helping their business grow or increase sales. That compared to 29 per cent who disagreed that the post-Brexit arrangement was helping.

Some 109 companies took part in the latest trade survey over the September and October period, representative of a spread of businesses in terms of size, sector and ownership.

The report concluded: “The general sense is that while there are some hurdles with the protocol, the benefits outweigh the costs and that in ironing out some of the issues Northern Ireland has a significant advantage that it should be exploiting.”

The report showed the biggest concerns for businesses related to currency exchange rates (71 per cent), with just over half (53 per cent) expressing concerns over accessing supply chains.

A similar proportion said UK products and services were too expensive, with 47 per cent identifying challenges with the protocol as a concern.

A similar number (45 per cent) flagged up political instability as an issue.

The report found: “The lack of a functioning Executive is a negative and creating a poor image of the region for customers. This is on top of the poor reputation of the UK currently.”

According to the survey, the rest of the European Union was also a key sales market, followed by North America. Asia was identified as an important market for purchases, with 41 per cent of respondents buying goods from this market.

In the last year, more firms have experienced increases in sales to destinations than experienced any fall. The strongest increase has been in sales outside the UK (or exports), with 60 per cent of firms experiencing an increase in exports, compared to 20 per cent who are reporting a decline.

NI Chamber chief executive, Ann McGregor, said: “Policymakers should be encouraged and challenged in equal measure by the results of this survey.

“Despite all the difficulties, the message is clear - Northern Ireland’s businesses are ready and willing to export but greater engagement and smoother processes are needed to drive better outcomes.

“On the Northern Ireland Protocol, it is no surprise that the view of the majority of the respondents is that the Protocol is a vehicle for growth, while there are real issues to be resolved for a significant minority of firms.

“But we have known what these issues are for some time. Agreed solutions must be delivered at pace. If we get all of this right, there is a real opportunity for growth in 2023.”

Anne Beggs, director of trade & investment, Invest NI added: “It is now more vital than ever that businesses across Northern Ireland take advantage of the opportunities.

“I would encourage any business that is interested in exporting to visit our website and complete our export health check to receive a tailored export guide and the opportunity to speak with one of our international trade advisors.”