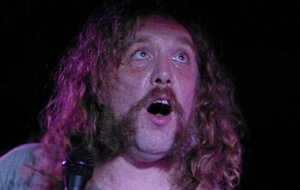 A FUNDRAISER will take place in Belfast next week in aid of the small businesses hit by the blaze at Cathedral Buildings in October.

The ‘Arson Around FUNdRazer’ will be hosted in the Black Box on Hill Street on December 12, with at least 11 acts performing.

Organiser Tina Kelly of Smashing Buttons said the event will help support a creative hub in the heart of the city.

“Lifetimes’ worth of work were destroyed, which can never be replaced,” she said. "But with the kindness and generosity of the people of Belfast we will breathe life back into the creative community who were so badly devastated. Times are tough but we are tougher.

“All the artists performing are either victims of the fire themselves, or friends and supporters. All funds raised will be put towards re-building the community of those affected.”

Magician and comedian, George Firehorse, will be MC for the evening, with the Monkey of Truth set to make an appearance.

Comedy Harpist Ursula Burns will be performing live, and there’s a special screening of her hit movie ‘Portrait of a Watcher’ in the Green Room after her set.

Belfast’s trad Irish/Spanish supergroup will be laying on a spectacular set.

“Viva Eire! are a collective of local Spanish and Irish artists and performers, who are coming together to showcase the talents of our Latin and Trad communities here in Belfast,” said Tina.

“Los Dramaticos will be dazzling the audience with songs and instrumental pieces from around Latin America and Spain.

“Their sound is a fusion of the flamenco and Andean traditions. This reflects their heritage. Victor Enriquez is a master charango player from Valparaíso in Chile.

“Paddy Anderson is one of the most accomplished flamenco guitarists in the UK and Ireland.”

Included in the line-up is fiddle player Aidan Mulholland, the violin restorer who lost everything in the fire, including irreplaceable antique instruments that were over 100 years old.

They will be joined by Myles McCormack, whose music is influenced by everything from historical ballads to space prog-rockers, Hawkwind. His songs are lyrically nuanced and deftly describe the tumultuous nature of life.

Every show ticket purchased will receive a free entry to the ‘Raise for the Razed’ raffle,” said Tina.

“Lucky winners will walk away with prizes such as two tickets to see Elton John, two tickets for Lionel Richie, a four-person party-pass to Paolo Nutini or two tickets for Paul Heaton & Jacqui Abbott (The Beautiful South)’s shows in Belfast next year.”

Others include a tree planting session with The Phantom Planter, A couple’s kickboxing session, (handy to settle those post-Christmas arguments), and a £500 Press & PR campaign from Excalibur Press and many more still to be announced.

All the trad & Spanish artists will be rounding off the performances to close the live show with a massive set-closer number.

They’ll be joined on stage at various times throughout the night by Mexican Dance Belfast, the flamboyant Flamenco dance troupe, who will ensure that we all have a Feliz Navidad!

Drag artist Onya Becks is hosting a special festive edition of ‘Lip sync for your drink!’, as well as performing a couple of Christmas Classics herself.

Tina hints at the unexpected: “Like one of Marley’s ghosts, attendees will be visited by a mystery comedy guest whose presence will be felt by everyone in the room. But he’ll be yanking your chains, not jangling them! All will be revealed on the night.

“The evening will be rounded off by the ‘All Request Christmas Disco’, with no songs barred. All requests will be played. No DJ snobbery here. Okay, maybe not Mariah Carey.”

Tickets for the event can be accessed here.

Carson McDowell announce new round of promotions in Belfast