CRH puts Farrans up for sale as construction work dries up 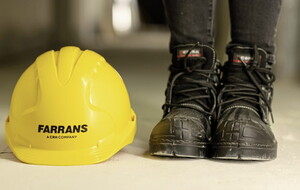 Following a strategic review, CRH says it is exploring the potential divestment of its construction contracting business Farrans

DUBLIN-based construction giant CRH Group has put its Farrans operation in the north up for sale, it has emerged.

The Irish News understands that CRH, which last year had revenues of €31 billion (about £26.5 billion), has already notified senior staff internally about the move.

Farrans is part of the Northstone Group, which is in turn a subsidiary of CRH plc.

The civils division of Farrans, which sits under the umbrella of Northstone (NI), has remained successful but the construction side of the business has been declining in profits and turnover - a malaise running right across the wider building sector in the north right now.

And one Farrans insider who spoke to the Irish News on guarantee of anonymity said he “fears for wholesale job losses if a buyer can't be found.”

Farrans' contribution to CRH is thought to be around 2 to 3 per cent on a yearly basis, but in the past two years it has reported a loss of earnings.

CRH is the leading building materials business in the world, employing 73,000 people at 3,155 locations in 29 countries, including around 550 at Farrans, which has more than 80 years’ experience in delivering civil and building projects across the UK and Ireland.

The Irish News understands that, for now, CRH has received no firm interest in a buyer for Farrans, which is currently finishing off a number of active jobs both in Northern Ireland (these include the transport hub in Belfast for Translink) and England.

But the only new construction project on the island is a major development in Cork, to where a number of northern-based workers have already been relocated.

“Beyond that, there's nothing new coming through for construction, and people from Northern Ireland who've been working in England and who were promised an opportunity to come back home are basically being told there's no work for them,” the insider added.

The company’s work in the north of England involves the construction of a new 24km pipeline, which will cross underneath the River Tees and Alwent Beck to a depth of 50 metres.

The second project in Suffolk will see Farrans design, supply and instal a new bores treatment stream at Barsham Water Treatment Works. Both these projects are expected to be completed in 2025.

In November CRH reported higher sales and earnings for the nine months to the end of September and confirmed its full year guidance of about $5.5 billion – well ahead of last year.

In a statement to the Irish News a spokesman for CRH said: “While no final decision has been made, following a strategic review, CRH is exploring the potential divestment of its construction contracting business Farrans.

“The business, which has a successful track record, a strong market presence and a skilled workforce, continues to operate as normal across all its projects. Farrans will continue to update its employees throughout the process.”

CRH puts Farrans up for sale as construction work dries up