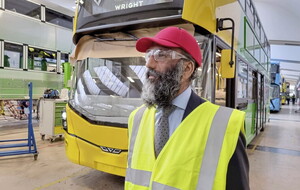 Buta Atwal is set to remain as Wrightbus CEO until further notice.

The order will see 39 double decker StreetDeck Electroliner BEVs rolled out across London and Hertfordshire by the transport company, which is owned by the Singapore-based ComfortDelGro Corporation.

Wrightbus said all the new electric buses will be fully built in Ballymena.

It’s the latest significant order to be announced by the bus-maker in recent months.

READ MORE: Wrightbus hits 1,000 workers as it continues to ramp up production to meet demand

Wrightbus landed a £81 million order from First Bus to supply 193 buses across England in August.

That followed a major framework procurement deal announced with the Republic’s National Transport Authority (NTA) in June 2022, which will see an initial 120 electric buses supplied. But Wrightbus said the order could see up to 800 vehicles delivered over a five-year period.

Last week the company, which was bought out of administration by Jo Bamford in October 2019, reached its 1,000th employee.

But the firm's chief executive Buta Atwal has confirmed he is no longer leaving the manufacturing group this year.

The Derby native was drafted in by Jo Bamford to help revive the Ballymena business in late 2019, when just 56 employees were left in the wake of its collapse.

He was due to step aside at the end of 2022, with Joerg Hofmann moving from black cab manufacturer the London Electric Vehicle Company (LEVC), to take over the post.

But Mr Atwal told The Irish News that is no longer the case.

“Last year I wanted to move on and we recruited Joerg. Unfortunately, Joerg’s had a personal situation where he’s had to take a step back and will not be able to fulfil what we wanted him to do.

“So Jo has asked me to again cover until further notice.”

Buta Atwal is set to remain as Wrightbus CEO until further notice.

High Flyers: Farming has built a backbone for ubloquity's Ellen